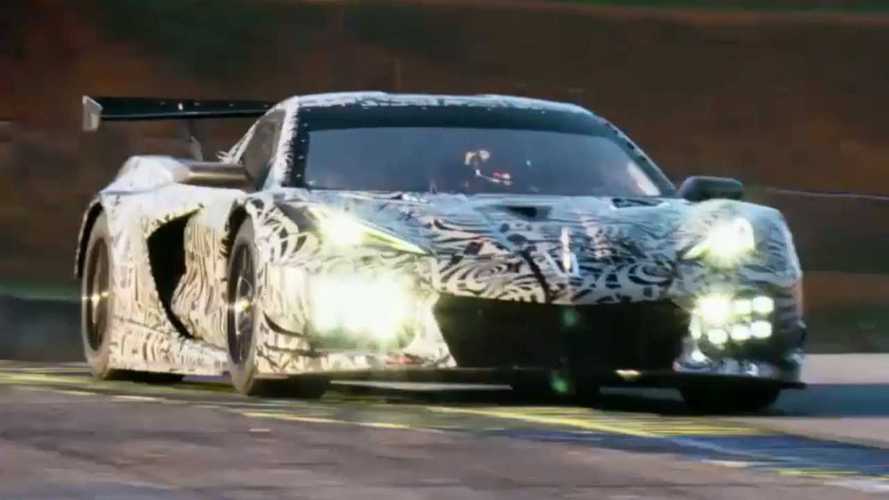 The track-only machine was briefly seen on video during the C8's debut.

Aside from giving us a quick look at the droptop Corvette at the very end of the C8’s debut event, Chevy also teased the C8.R by showing the race car undergoing testing on a track. Details are scarce at the moment, but we won’t have to wait much longer to learn all the juicy details as the company with the bowtie emblem promises to unveil the Corvette Convertible and C8.R “soon.”

The C8 is finally here:

We apologise for the quality of these images, but these are actually screenshots from the video montage that was displayed on the big screen right at the end of the event held in Tustin, California. If you made it through the whole livestream, you probably noticed that the the C8.R made its appearance from the 58:17 mark. For a couple of minutes, footage of the race car alternated with renderings of a camo-free Corvette Convertible pre-production car with the top down and the body finished in grey.

The C8.R doesn’t come as a surprise taking into account the first details about a track-only next-gen ‘Vette emerged way back in February 2018. Later that year in August, audio coming from a prototype’s engine revealed what might’ve very well been a turbocharged engine, which would be a departure from the C7.R’s naturally aspirated mill.

The very same month, our spies caught on camera a prototype of the C8.R likely in GTE specification featuring an aggressive body with a massive rear wing and a prominent front splitter. The images – along with the aforementioned audio – originate from a test vehicle caught at Road America in Elkhart Lake, Wisconsin nearly a year ago.

Seeing as how the C8.R will probably be ready for the 2020 motorsport season, it means Chevy will take the wraps off its all-new race car in the months to come.