Audi A8 gets predictive suspension tech for silky smooth ride 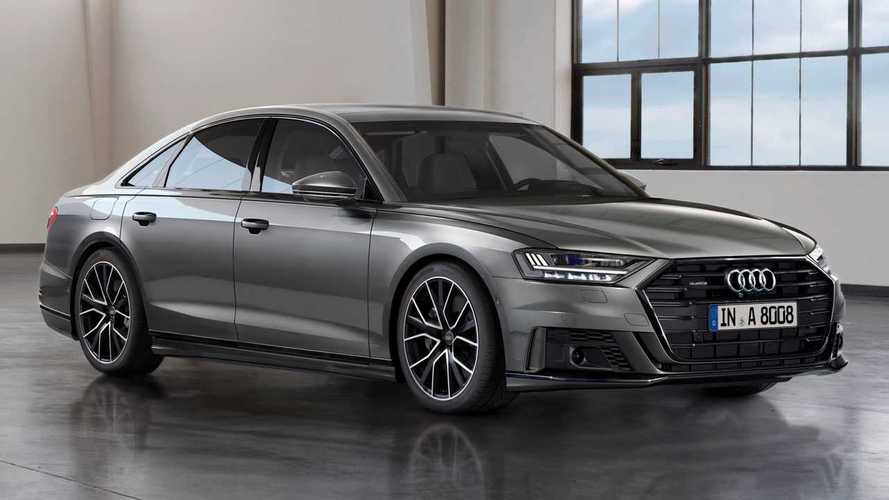 The suspension automatically adjusts itself within five-tenths of a second.

When the Audi S8 made its debut at the beginning of the month, one of its main features highlighted in the press release was the predictive suspension able to limit body roll and boost comfort. It’s going to be standard on the hotter derivative, and now the Ingolstadt folks have announced it will be an option on the regular A8 models in Europe equipped with the TFSI engines.

Audi's flagship in the news:

Italian tuner is building a W12-powered Audi A8 Avant Allroad
⠀

Audi uses the word “initially” to talk about the suspension’s availability only with the petrol units, so from this we can likely understand diesels will also get the clever system later on in the A8’s life cycle. How does it actually work? We will allow Audi to better explain the nifty tech:

“There are compact electric motors located close to each of the Audi A8’s wheels, running off the car’s 48-volt primary electrical system and governed by power electronics. A belt drive and a compact harmonic drive step up the electric motor’s torque almost 200-fold to 1,100 Nm (811.3 lb-ft) and apply it to a steel rotary tube. The latter is permanently attached to a preloaded titanium rod located inside it and capable of turning through more than 20 degrees. From the end of the rotary tube, the force is transmitted to the suspension via a lever and coupling rod – at the front suspension it acts on the spring strut, and at the rear suspension on the transverse link.”

Thanks to the air suspension, Audi argues the A8 handles pretty much like a sports car when the “Dynamic” mode is activated by reducing body roll from more than 5 degrees to just 2 degrees during fast cornering. Switch on “Comfort Plus” from the Audi Drive select and the air suspension will iron out all road imperfections to enable a silky-smooth ride worthy of a luxobarge.

The Audi A8’s predictive suspension works in tandem with a front-mounted camera able to detect uneven surfaces before you actually drive over them in order to prepare the car by pre-adjusting the suspension for maximum comfort. The camera is so fast that it gathers information about the surface up ahead 18 times a second, while the active suspension can lower or lift the saloon’s body by up to 85 millimetres (3.3 inches) within five-tenths of a second.

The predictive suspension comes with a benefit even when the car is standing still as it automatically raises the body by as much as 50 mm (2 in) when you use the door handle to enable an easier entrance. Fancy.

Audi A8 by ABT

Multifaceted personality: predictive active suspension in the A8 flagship model

Audi is now offering another high-tech innovation for the Audi A8 luxury sedan – predictive active suspension. Depending on the chosen settings, it gives the brand’s flagship model the supreme ride comfort of a chauffeur-driven limousine or the firm handling of a sports car. In Germany and other European markets, predictive active suspension can initially be ordered for the TFSI versions of the Audi A8.

Predictive active suspension in the Audi A8 is a fully active suspension system. Its electromechanical actuators adjust the suspension. They can lift up or force down each of the luxury sedan’s wheels individually, to actively manage the body’s ride height in every situation. The active suspension can lift or lower the body by up to 85 millimeters (3.3 in) from its central position at all four corners within five-tenths of a second.

There are compact electric motors located close to each of the Audi A8’s wheels, running off the car’s 48-volt primary electrical system and governed by power electronics. A belt drive and a compact harmonic drive step up the electric motor’s torque almost 200-fold to 1,100 Nm (811.3 lb-ft) and apply it to a steel rotary tube. The latter is permanently attached to a preloaded titanium rod located inside it and capable of turning through more than 20 degrees. From the end of the rotary tube, the force is transmitted to the suspension via a lever and coupling rod – at the front suspension it acts on the spring strut, and at the rear suspension on the transverse link.

Predictive active suspension operates highly efficiently. Its average power consumption is in the range of just 10 to 200 watts – much less than that of comparable hydraulic systems. Whenever the driving physics try to force the body down on the wheel, for example on poorly surfaced roads, predictive active suspension counteracts this effect. An extremely sharp impulse – as encountered on the racetrack, for example – will produce a very short but high energy demand of potentially up to 6 kilowatts. Depending on the driving situation, up to 3 kilowatts can also be fed into the 48-volt battery.

Wide spectrum: from “dynamic” to “comfort plus”
In conjunction with the air suspension and Audi drive select dynamic handling system (both standard), predictive active suspension in the Audi A8 enables an unprecedented spectrum for driving. In the “dynamic” profile, the luxury sedan acquires the handling of a sports car. The A8 turns in firmly, and when cornering fast with 1 g lateral acceleration the body inclination (roll angle) is just 2 degrees – as opposed to more than 5 degrees with standard suspension. In every driving situation the rolling moment is optimally distributed and dive when accelerating or braking is reduced to a minimum. The result is a sporty quality of self-steering in the neutral to slightly oversteering range. The Audi flagship model runs with rail-like precision and guarantees outstanding, safe handling characteristics.

Innovative technologies: prediction as well as reduced transverse and longitudinal forces
If, on the other hand, the “comfort plus” profile is selected in Audi drive select, the luxury sedan glides with velvety smoothness over any bumps in the surface. The predictive active suspension works together with the front camera. Thanks to this camera, the flagship model identifies uneven surfaces before they are reached and predictively regulates the active suspension. Even before the car hits a bump, the predictive function developed in-house at Audi signals the correct positioning travel to the actuators and actively adjusts the suspension. This reduces body movement and compensates almost entirely for long road undulation or similar unevenness. This complex process takes just a few milliseconds: the camera generates information about the surface properties 18 times a second. The electronic chassis platform processes the road surface data and precisely actuates all suspension components almost in real time.

In the “comfort plus” profile, predictive active suspension offers another innovative feature: transverse force reduction. Upon entering a bend, this raises the body on the outer side of the bend while lowering it on the other side. The A8 leans into the bend by up to 3 degrees, rather like a motorcycle. This angle reduces the transverse forces. The effect is especially impressive in the speed range from 80 to 130 km/h (49.7 to 80.8 mph) and at lateral acceleration of up to 0.4 g. The driver and passengers barely notice the cornering maneuver – and even a full cup of coffee in the cup holder will not spill. The intensity of transverse force reduction depends on a number of factors: the road speed, the g forces encountered, and the road surface. The electronic chassis platform – the central suspension control unit – processes the data supplied by the sensors and passes it on to the active suspension’s control unit.

For straight-line travel in the “comfort plus” profile, predictive active suspension can equally reduce the forces acting on the human body. When accelerating hard or braking in situations that could impact comfort, it equalizes the body’s pitching movements – when stopping at lights, for example. The slight overcompensation that it realizes means the occupants are if anything pushed very gently into their seats instead of against their belts. Predictive active suspension even gives the occupants lavish comfort treatment when the car is at a standstill. When the door handle of the A8 is operated, the body is quickly raised by up to 50 mm (2.0 in) – for even easier entry and exit. The new “elevated entry” function makes this possible.

With pre sense 360°: even greater safety
Predictive active suspension also increases passive safety in combination with the “pre sense 360°” safety system, part of the assistance system “City”. It operates in conjunction with the central driver assistance system (zFAS), which uses the merged sensor data to identify hazardous situations around the car. In an impending side impact at more than 25 km/h (15.5 mph), the active suspension raises the body by up to 80 millimeters (3.1 in) on the side of the impact. This brings the sill into a better position to absorb the impact energy. Deformation of the cabin and the loads acting on the occupants, above all in the chest and abdominal areas, can thus be reduced by up to 50 percent compared with a lateral collision in which the suspension is not raised.

Customers in Europe can order predictive active suspension in the Audi A8 from August 2019. The extra charge in Germany is EUR 5,450.