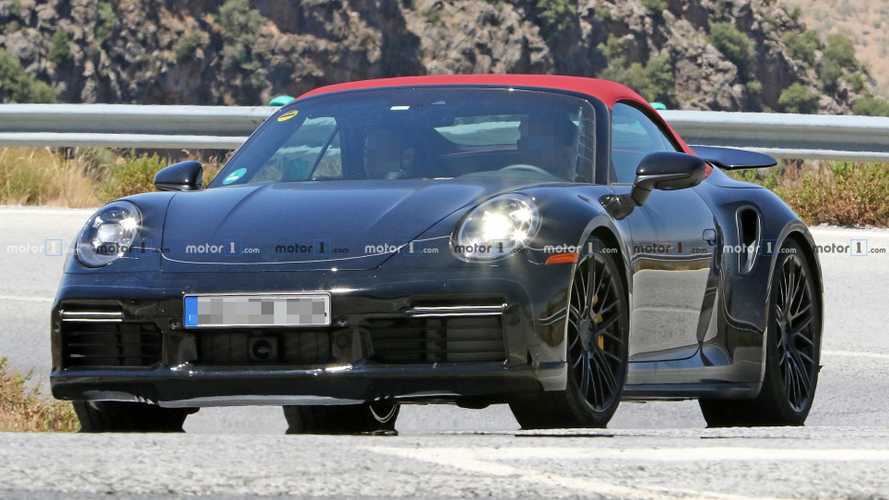 The crimson roof over the black body and dark wheels looks fantastic.

Looking closely, this test prototype wears very subtle camouflage around the front fascia. The layout of the vents and inlets would likely be the same on the production model, but their design might change slightly when the concealment comes off.

This vehicle wears huge, black wheels with similarly massive drilled discs behind them. The yellow calipers denote that this one has the company's carbon-ceramic brakes.

Even more of the turbocharged terror:

At the back, the 911 Turbo has an active rear wing that can rise and tilt. The engineers conceal the taillights that span the vehicle's width. Quad trapezoidal exhaust outlets emerge from each corner.

There are no good images of the 911 Turbo's interior, yet. Judging by previous generations, it probably looks a whole lot like the standard model but with some special touches to justify the vehicle's higher price.

According to the latest rumours, the 911 Turbo will use an updated version of the existing 3.8-litre twin-turbo flat-six engine. In standard guise, the mill will likely make 600 bhp and 640 bhp for the hotter S version. The drivetrain will reportedly consist of all-wheel drive with rear-wheel steering, and an eight-speed dual-clutch gearbox will purportedly replace the existing seven-speed unit.

The hardtop 911 Turbo should debut before the end of the year and be on sale in 2020. Generally, Porsche staggers its debut of droptop models, which points to the cabrio have an unveiling in 2020.