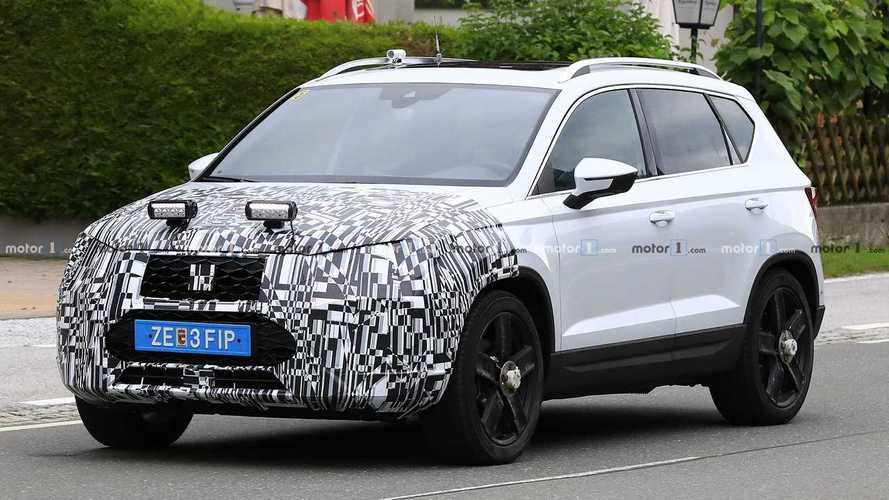 Could a PHEV powertrain be in the cards?

It was exactly March 1, 2016, when SEAT finally joined the SUV segment with the debut of the first-ever Ateca during the 2016 Geneva Motor Show. It was followed by the sportier Ateca FR and the performance Cupra Ateca two years later. Now, approximately three years after the market launch of the Spanish brand’s first SUV, we have the first spy photos of the refreshed Ateca taken somewhere in the Alps.

We are witnessing the early test stage of the facelifted model and our photographers sent us shots with two different prototypes. The first one appears to be identical with the Ateca that’s on sale today – even the front fascia doesn’t have any changes, but the second one is a bit more interesting. It has a fully disguised front end, including the headlights, which is something we don’t see every day in the industry.

Instead of using its standard headlights, this trial car features auxiliary lamps mounted to the bonnet. This likely means the headlights are getting a redesign or at least the internal graphics are going to be changed. The entire bumper and parts of the grilles are also disguised hinting at additional visual improvements for the front end.

While the rear is basically uncovered, there are a number of sensors that seem to be interesting. There’s a sensor for each wheel and probably the Spanish engineers are testing some sort of energy recuperating system. Based on that, one can speculate the Ateca could be getting the plug-in hybrid powertrain that’s in the cards for the next-generation Leon in 2020.

Given the Ateca’s age, we don’t expect to see the revamped model this year. The SUV is still in the early test phase so a debut in the first half of 2020 seems likely, probably during next year’s Geneva Motor Show.