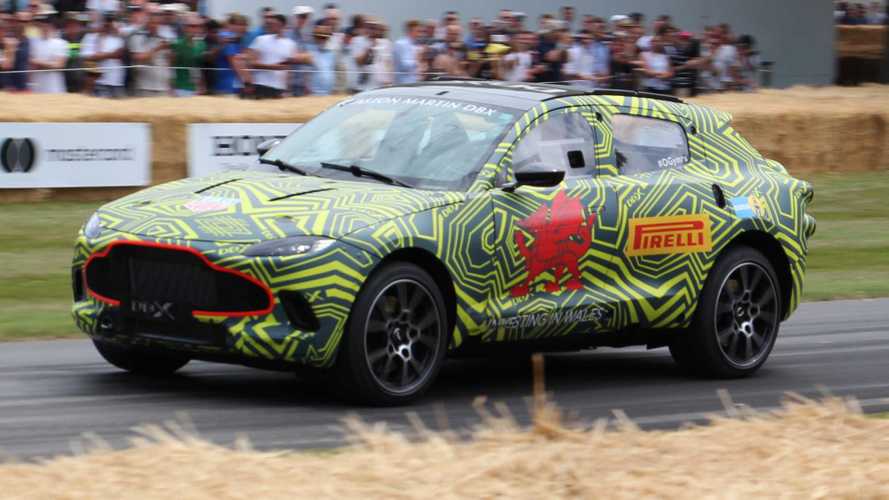 Porsche and BMW were among the automakers benchmarked for the future SUV.

If you were watching the 2019 Goodwood Festival of Speed last week, you may have seen a strange looking crossover-ish thing with a yellow camouflage wrap and a face reminiscent of an Aston Martin. Okay, we’re being coy; the garish SUV actually had an Aston Martin DBX windscreen banner, so there’s no mistaking it for something from a more pedestrian brand. This is Gaydon’s first large people mover, and we’ll give credit where credit is due – it looked pretty impressive charging up the famous hill.

See the DBX in action:

A recent report from Motoring com.au might shed some light on the DBX’s ability to seemingly defy physics. Among other things, the report features Aston Martin executives explaining that the DBX program is the automaker’s largest and most important effort ever. It’s also a program without any ties to existing SUV platforms, and as such, Aston Martin has the liberty to create something with enthusiastic DNA from the ground-up.

To help emphasise that process, the report identifies the Porsche Cayenne Turbo as a benchmark machine for the DBX. The BMW X6 M was also mentioned as a benchmark for handling prowess. In fact, the report states Aston Martin took several SUVs from competitors to Germany for some intensive test drives, not the least of which included laps at the Nürburgring and sprints on unrestricted Autobahn sections up to 300 km/h, which equates to approximately 186 mph. Such testing isn’t out-of-the-ordinary for automakers, but it stresses how serious Aston Martin is about making sure its first SUV isn’t a soft five-passenger bus with a big engine.

Get ready for the DBX:

Aside from the positively delicious noise produced by its V8 – believed at this point to be a 4.0-litre twin-turbo mill – the DBX looked remarkably composed during its Goodwood ascent. It will need to be stout if it hopes to compete with the likes of Porsche, not to mention the Lamborghini Urus. However, it will also need to have some measure of practicality if it hopes to capture a lucrative piece of the high-end super-SUV market. That’s an aspect we won’t be able to gauge until the DBX becomes reality, which could happen later this year.