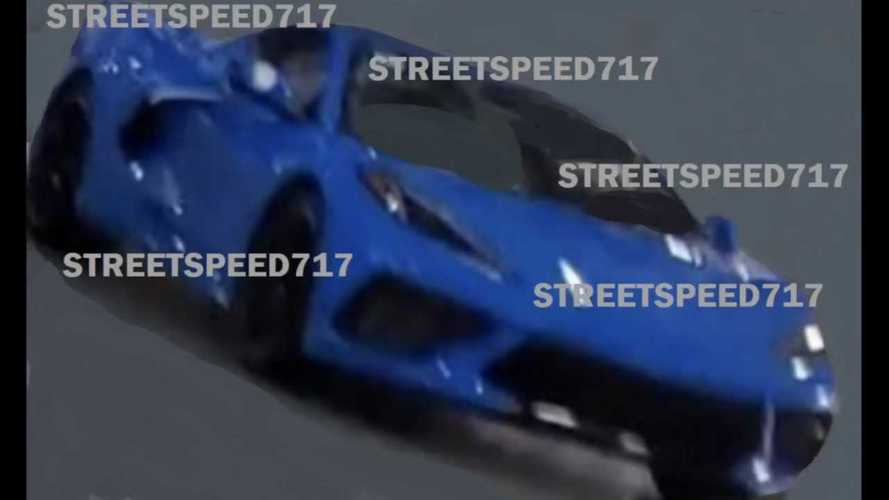 A blurry photo featured in a YouTube video claims to be the real deal.

We are just over a week away from what’s easily the most anticipated new car reveal of the year, possibly of the last 20 years. We’re talking about the C8 Chevrolet Corvette, and yes, Motor1.com will be there with live images and video of the first-ever production ‘Vette sporting an engine in the middle. However, an interesting video just surfaced on YouTube from an account named Street Speed 717 that claims to have a leaked image of the full car. It shows up at the 6:48 mark in the video; here’s a screenshot from that moment.

The big question now is whether this is the real deal. As you can see, the photo is very blurry and obviously doctored – in fact, the narrator in the video clip clearly states that he cropped the car from its original background so the location wouldn’t be revealed. That certainly explains the sharp edges around the car’s exterior, and apparently, additional work was done to hide occupants because the windscreen has certainly been photoshopped as well. Rather than just blur out images behind the glass, a digital paint appears to have been used.

By comparison, here are some renderings we've seen in the last few months from FVS and Chazcron at MidEngineCorvetteForum.com.

Our thoughts on this alleged photo leak? Well, we have no information about Street Speed 717, though presumably, this individual is buying a new C8 since the video title says as much. We have no information as to where this photo originated from, and we know it’s been digitally doctored. It seems strange that the image is terrifically blurry, yet there was apparently something clear enough in the windscreen to warrant a slathering of grey from a digital paintbrush.

Hear the mid-engined Corvette's V8 in this highway spy video
⠀

Furthermore, we’ve spent a lot of time looking over literally hundreds of spy photos and renderings. We know that most of those camouflaged prototypes have strategically placed false body panels attached to the car beneath the swirl wrap, and it's possible some of those humps are visible on the side of this car. Of course, we can’t say for certain because this photo is so blurry – conveniently blurry as some might say. Then again, the apparent reflections off the finish have a curious realism to them.

Could this be the real deal, or is it a forgery? In any case, we will definitely get you up-close and personal to the actual mid-engined Corvette on July 18, when it's revealed to the world in California.