This 700-bhp track weapon has serious potential, but it looks like some steering tweaks are in order.

Ford’s racing days with its GT supercar are over, but there’s a rather significant consolation prize for those with close to £1 million and serious connections to the top brass at Dearborn. We’re talking of course about the recently revealed Ford GT Mk II, which is currently on both static and dynamic display at the 2019 Goodwood Festival of Speed. We’ve already seen photos of the track-only supercar, not to mention video footage of it having some fun at Ford’s Dearborn Proving Grounds. Now, we have our first real-world experience with the GT watching it tackle up the hill at Goodwood. 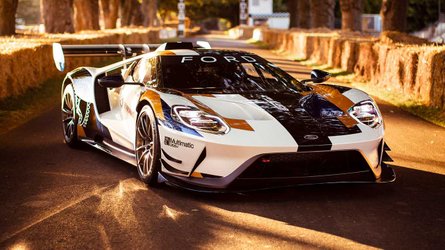 Our first impressions? Honestly, perhaps a short hill climb isn’t the best place for this beast, at least without some additional tweaking. As you’ll no doubt notice in the video, the GT darts left and right a lot. We can only assume something is amiss with the steering setup, because just about every corner sees the GT wobbling back and forth like a bloodhound trying to decide which direction the fox went. Kudos to the driver for keeping the car pointed straight under such conditions, and for keeping the speed up in the process.

What sets the Mk II apart from the road-going GT and other race-spec models? The FIA rulebook was tossed out the window for this special edition, which gave Ford and partner Multimatic freedom to explore the full capabilities of the mental machine. The 3.5-litre EcoBoost V6 gets no less than 200 extra ponies to play with, bumping total output to somewhere north of 700 bhp. Further helping power-to-weight is a 100-kilogram reduction in mass, accomplished in part by ditching the big steel brakes for carbon-ceramic units.

It has numerous aerodynamic tweaks as well, enough to generate an extra 180 kilos of downforce at speed. Its unique front fascia falls somewhere between the race car and street car, and Ford says it's as fast as any GT3-spec race car. Admittedly, it doesn’t sound the best on this run, but considering the massive performance potential of this ride, we’d be happy to get used to it.

Ford plans to build just 45 of these special Mk II track-only racers. We’re simply excited to see additional runs at Goodwood with the handling gremlins dialed in, so we can better witness the true potential of this special machine.