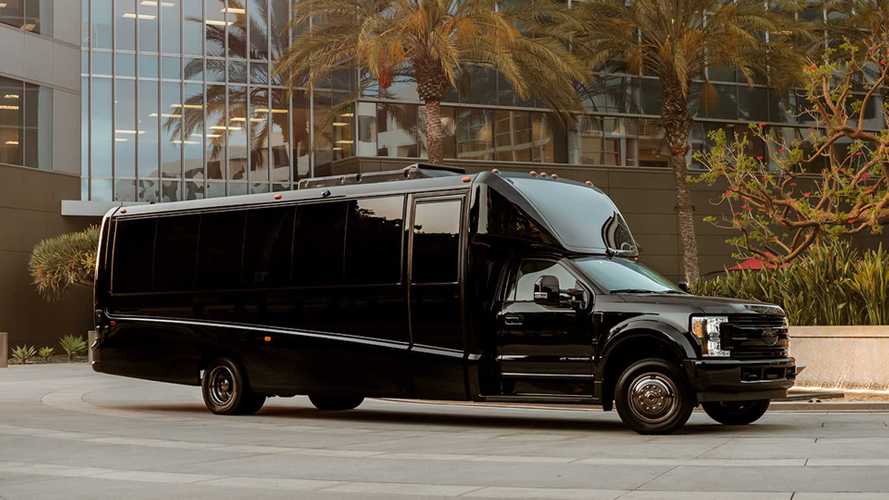 Why make money if you can't enjoy spending it lavishly . . . while making more money?

Lexani Motorcars has a reputation for taking already large vehicles and creating something positively extravagant. We’ve even featured a few of them here at Motor1.com, but this time the company has completely reset the bar. Say hello to the first million-dollar Ford truck you’ve ever seen, wrapped in a 33-foot black suit and called the G:77 Sky Master.

You read that correctly. The foundation for this extravagant mobile suite is a Ford F-550, and when all is said and done, you’ll pay a cool $1 million (approx. £800,000) to make it your new office-away-from-office. Of course, you do get some neat-o options for that seven-figure price tag, not the least of which being 24k gold plating all over the place. Browse through the photo gallery below and you’ll see what we mean.

At first, we figured the photographer for these shots had the white balance on the camera messed up since everything looks brown. However, looking closer we realised the interior is positively filled with warm tones. Six custom power seats are adorned with tan leather and offer both heating and massaging options. Tan walls complement wood trim, the latter of which also hides a comprehensive home theatre system with a 65-inch television, among other things. A kitchenette, bathroom, and a "VIP boardroom" also takes up space in the massive machine, though we have a nagging question. Wouldn’t anyone fortunate enough to be invited on-board be considered a VIP already?

We’re thinking too hard about this. Massaging seats, deluxe entertainment systems, a kitchen and bathroom with gold-plated hardware – this isn’t a mobile office. It’s a mobile retreat from the office, dressed up to look like a place where high-rolling CEOs or image-conscious one-percentres might attempt to make some tough "business" decisions while enjoying a drink or three.

If this makes us sound a bit jealous, well, you’re not wrong.

Ferrari Wants To Sell You A Racing Office Chair For £8,500

Match your Lamborghini Aventador with this crazy cool desk

LOS ANGELES, July 3, 2019 /PRNewswire/ -- The G-77: Sky Master simply-stated is the world's first hyper-luxury transporter built on the Ford F-550 chassis. Every inch of this over-the-top 33 ft. mobile office has been retrofitted with the brand's artisans' renowned craftsmanship, 24k gold-plating, and state-of-the-art electronic appointments. Lexani is calling it, "A rolling mosaic of utility, opulence, and comfort, at a level never before witnessed in a transporter."

Whether it's for work, or play, the G:77 Sky Master is truly in a league of its own. Lexani Motorcars is offering it at $1 million (USD).