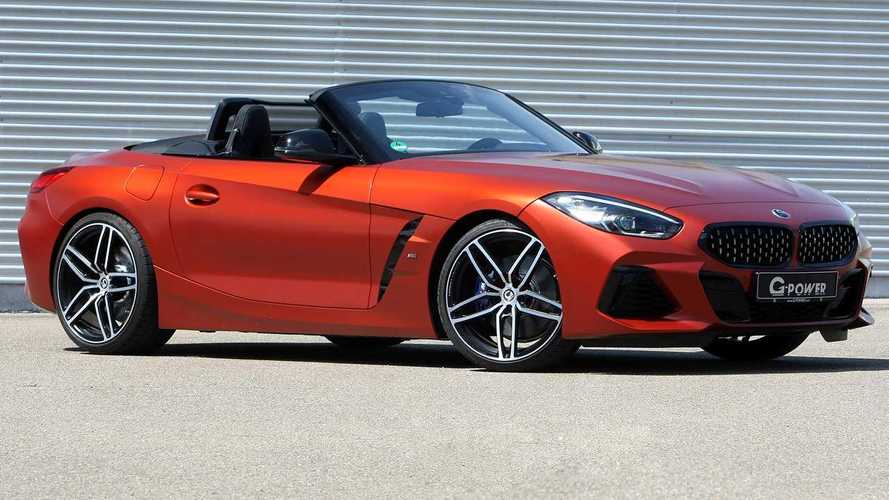 In the absence of BMW's M division tuning the Z4 into a meaner model, the aftermarket is stepping up to the challenge. For example, G-Power is able to push the roadster's output to 494 bhp from a 3.0-litre turbocharged inline-six engine, versus 335 bhp for the European-spec M40i grade or 382 bhp for this version in America. Torque grows to 516 pound-feet, instead of 369 pound-feet in stock form in both Europe and the U.S.

G-Power claims that the tuned Z4 can hit 62 miles per hour in 3.9 seconds, versus 4.5 seconds in the factory trim. The firm estimates the roadster can hit over 186 miles per hour, rather than the electronically limited 155 mph off the showroom floor.

Figure out how much power the Z4 has:

G-Power's results are fairly impressive since the tuner's Swiss competitors at Dähler can't make the car quite as potent. For example, the firm's stage 1 kit takes the Z4 to 402 bhp and 457 lb-ft, and the stage 2 version takes the output to 435 bhp and 472 lb-ft.

G-Power largely focuses on upgrading the Z4's performance, but the company can also tweak the roadster's look with a set of 20-inch wheels with five pairs of dual spokes. They measure 9 inches wide in the front and 10.5 inches at the rear. A set of them goes for €6,681 (£5,990).

In its meanwhile 3rd edition, the BMW Z4 returns to its roots. Forgotten is the metal roof, from now on, a fabric hood spans over the heads of the passengers, as it suites best for a real roadster. And the visual appearance leaves no doubt that the current Z4 generation is again a true sportscar. As already known from other BMW series, the 40i claims the prestigious addition "M" in the name, thus marking the pole position in terms of performance for the time being, with standard 340 hp (250 kW) and a torque of 500 Nm. Rumors of a "real" Z4 M persist, but have not yet been confirmed. So, BMW enthusiast who just can ́t have enough power have two options now: either prepare for an uncertain waiting time, or head directly to G-POWER now for a performance upgrade.

(all prices are net)

Because as usual G-POWER - the performance specialist with over 35 years of experience – is one of the first companies to unveil the potential of this racy two-seater. Only a few weeks after its market launch, G-POWER offers already no less than four different performance stages up to 500 hp (368 kW) / 700 Nm.

As usual, G-POWER uses a bespoke software mapping in order to start its performance upgrades. It replaces the standard programming of the engine control unit with the so-called Performance Software V1, a mapping developed by G-POWER for the new Z4, which produces an extra 40 hp and 30 Nm. A somewhat "more aggressive" tuned V1 S version of the Performance Software boosts the maximum power output to an awesome 410 hp (301 kW) / 580 Nm. A plus of 70 hp and 80 Nm. Everything purely electronic and without changes to the hardware periphery of the inline-six-cylinder engine.

Modifications of the periphery are only needed from the next performance stage on. Here, G-POWER combines flow-optimized downpipes incl. sports catalytic converters with the matching tuned Performance Software V2 and the in-house high-tech all-wheel-dynamometer already measures 450 hp (331 kW) / 640 Nm. The G-POWER range for the BMW Z4 M40i G29 is completed by the aforementioned stage with 500 hp (368 kW) / 700 Nm, with which G-POWER not only anticipates the Z4 M, but in all likelihood even beats it. It goes without saying, that for a performance level like this, extensive modifications to the exhaust system and the standard supercharging system are mandatory. So, in addition to the downpipes from stage 2, a modified turbocharger is part of the package, as well. It is supported by a G-POWER intercooler with enlarged cooling capacity. Can be combined with all power levels and is absolutely recommended: the G-POWER Vmax increase. With this option, the upgraded BMW Z4 M40i can transfer its gained power in unrestrained speed, so that the speedometer needle can move - depending on the power level – up to the 300 km/h mark and beyond.

After all, safety is a top priority at G-POWER. It goes without saying that all standard diagnostic and motor protection functions remain untouched. To verify this, the G-POWER engineers rely on the features of the G- POWER high-tech dynamometer. Equipped with an eddy current brake, individual load points can be selectively controlled and held. Thus, the reality on the road is simulated perfectly and under controllable conditions. So, G-POWER can test its performance increase during all relevant operating and load condition of the engine during a vehicle life. This allows G-POWER to get the most out of the engines without overstraining them. Everyday usability and reliability are just as much a matter of course at G-POWER as gaining the best possible power output.

The distinguished appearance of the G-POWER Z4 M40i is further enhanced by the 9Jx20 and 10Jx20 double five-spoke G-POWER HURRICANE RR forged alloy wheels shod with 245/30 R20 and 275/30 R20 tyres. Forged from aircraft-grade aluminium, these ultra-light and very strong wheels, designed by CAD and optimised by FEA, are the lightest in their class, and lower the unsprung weight, for improved acceleration, handling and braking.