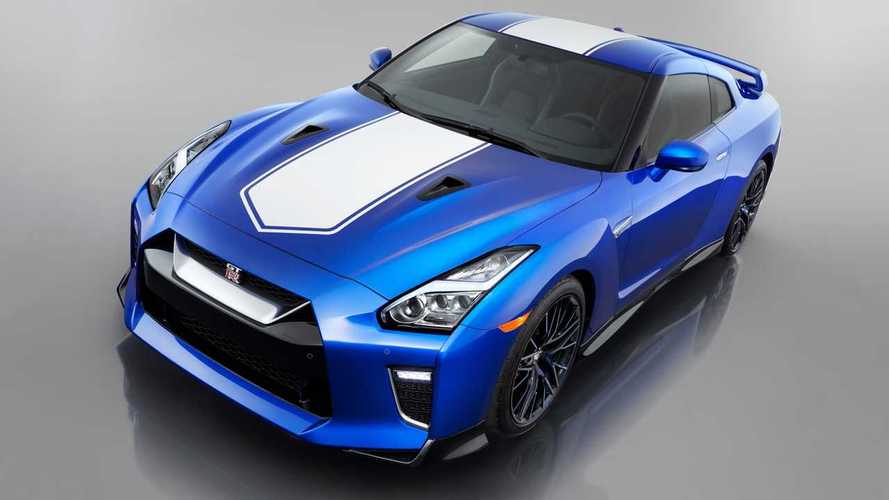 Just 50 examples are coming to Europe, with just 18 of those earmarked as right-hand drive.

Customers interested in Nissan’s new anniversary edition GT-R will have to spend just under £93,000 to secure their example.

More on the Nissan GT-R:

The car, which was designed to celebrate 50 years of the GT-R nameplate, was first unveiled at the New York motor show earlier this year, but the first cars will arrive in the UK in August. It’s one of two anniversary models Nissan has created of late, following on from the 370Z 50th Anniversary Edition.

Just 50 examples of the special-edition GT-R will come to Europe, with a mere 18 of those offered in right-hand-drive guise. Each super-exclusive vehicle will cost £92,995.

Externally, the car is set apart by its Bayside (Wangan) Blue paintwork and white racing stripes. The colour has not been seen since production of the iconic R34 GT-R was halted, but Nissan has brought it back from the dead. At the same time, Nissan has given the special-edition GT-R new 20-spoke, 20-inch black alloy wheels with blue accents.

Inside, the GT-R gets a ‘Prestige’ grey leather interior, with grey leather on the seats,and Alcantara headlining. Even the sun visors are wrapped in Alcantara, while the seats get embossed patterns in the leather.

Despite its visual upgrades, the GT-R gets the same 3.8-litre twin-turbocharged V6 as the latest iteration of the standard car. That means power stands at 557 bhp, although Nissan says it has tweaked the turbochargers to make the car more responsive, as well as fitting an updated automatic gearbox. It’s still a six-speed affair, but it comes with a new shift logic that makes downshifts “more aggressive” when the car is in ‘R’ mode.

Nissan has also fitted revamped exhausts to the 2020 GT-R, giving it a new titanium muffler and fitting fresh exhaust tips, which, fittingly for the anniversary model, come with blue burnishing. In addition, the suspension, steering and brakes have all been tweaked slightly in a bid to make the car easier to drive.

“The Nissan GT-R has been the icon of our company’s driving performance for the past half century,” said Shinichiro Irie, program design director for the GT-R. “We were highly motivated to ensure that the GT-R 50th Anniversary Edition stands out. While the exterior and interior changes may seem subtle at first glance, they’re still impactful, especially with the new paint schemes, keeping the car’s lines and overall presence modern and edgy.”