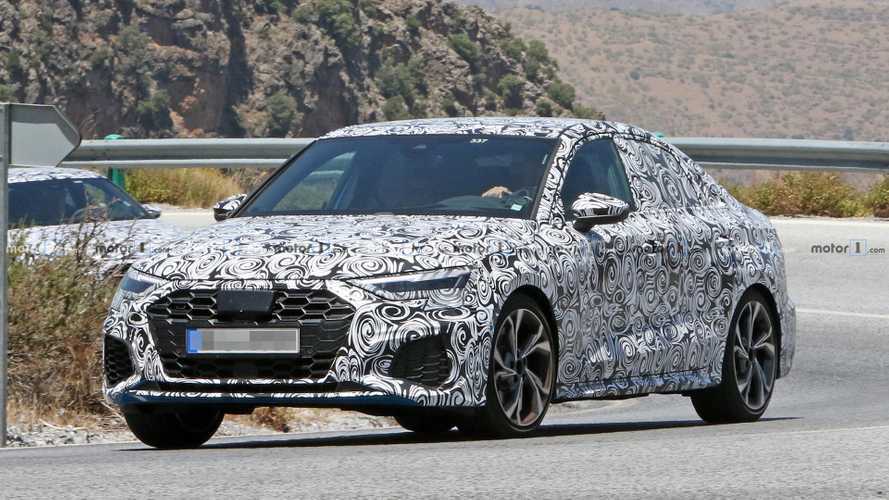 A new batch of spy shots provides our very first look at the next-generation A3 saloon. Specifically, our spies believe that this is the sporty S3 variant of the four-door.

Judging by these pictures, the front end of the saloon is the same as the hatchback. However, this example wears less camouflage and exposes the larger intakes in the corners, which also best identifies this car as the S3.

The roofline appears very similar to the existing model. The design makes the A3 saloon look like a slightly smaller version of the current A4 in profile. This one also wears an interesting design for the dual-spoke wheels that adds a jagged style to the traditional look.

Check out plenty of spy shots of the S3 hatchback:

The rear also helps identify this as the S3. It wears dual exhausts, and there is a diffuser spanning the area between them. The skinny, pointed taillights look handsome at the back.

There isn't much info yet about the new S3's powertrain. Speculation suggests the model would still use a turbocharged 2.0-litre four-cylinder engine making between 300 bhp and 320 bhp. As a performance-focused Audi, all-wheel drive would be the powertrain setup.

We expect the new A3 to debut in Europe in 2019 and for the S3 to follow it in 2020. It's possible that the saloon versions could premiere at the same time as their hatchback counterparts.