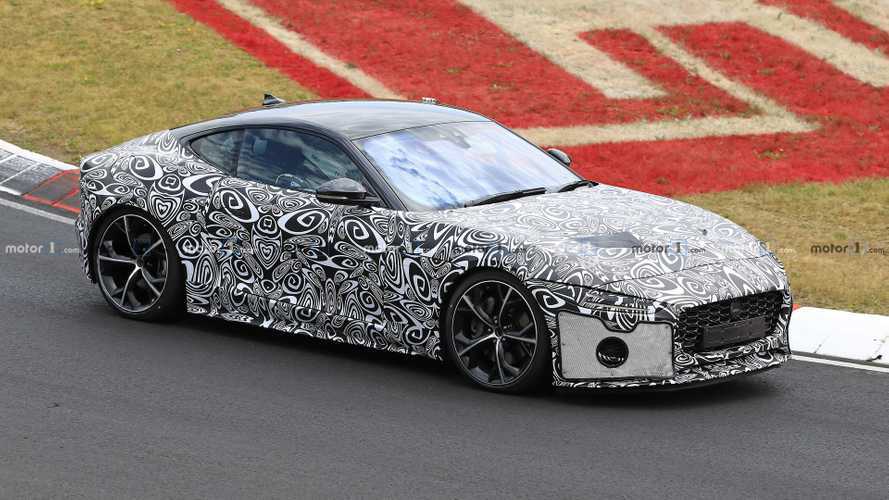 There could be a twin-turbo V8 from BMW under the hood.

Jaguar has said that a two-door coupe would always be part of its lineup, and by that, we mean an actual coupe with just two doors affixed to a vehicle that's not a high-riding crossover. Today we have proof of that, courtesy of a couple camouflaged F-Type prototypes lapping the Nürburgring. It doesn’t appear to be the full-on replacement Jaguar has mentioned previously, since the familiar F-Type shape is easily recognisable. Rather, an extensive facelift is in store for the posh coupe, which has endured pretty much unchanged since 2013.

Putting the F in fun:

Next Jaguar F-Type could go electric

That’s not necessarily a bad thing, as the F-Type has aged well. It’s hard to pinpoint specifics up front beneath the tight camo wrap, but a completely new face is coming our way that incorporates thin headlights with a slightly larger grille. The final product could adopt a look not unlike the Audi R8, though with softer edges. Details along the side are difficult to identify, though we suspect the F-Type’s fender wing sculpting could still exist beneath the cladding. A mild refresh to the rear fascia is also coming, along with redesigned taillights. Obviously, this holds true for the convertible version as well.

Beneath the skin, the refreshed F-Type will soldier on with its current architecture, though engine options aren’t known at this time. The current model offers a choice of four, six, or eight cylinders, all of which offer forced induction with either a turbocharger on the entry-level 296-bhp four-pot, or a supercharger on the 575-bhp 5.0-litre V8 in the range-topping F-Type SVR. However, we heard a rumour last year that a BMW-sourced 4.4-litre V8 could replace the 5.0, which has its roots from Ford. It’s also possible a hybrid powertrain could arrive eventually, though such an arrangement might befall the next-generation car as opposed to this facelift.

This is our first sighting of the retouched F-Type, so don’t expect to see the covers lifted soon. We haven’t heard any rumours about a potential reveal date, but some kind of event taking place in 2020 for the 2021 model year is likely.