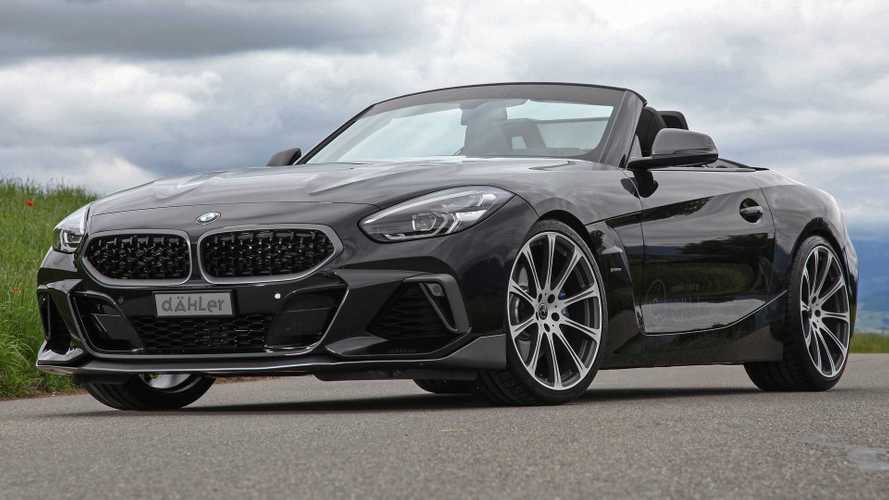 A recent dyno test revealed the Z4 M40i likely has more power than advertised, but that won’t stop people from complaining about BMW’s decision to rule out a full-fat Z4 M. For those hard to please, there’s always the aftermarket scene to count on should you want the inline-six to pump out higher horsepower and torque numbers.

When it leaves the assembly line at Magna Steyr’s factory in Graz, Austria, the BMW Z4 M40i with its 3.0-litre engine offers an already healthy 335 bhp. If that doesn’t quench your thirst for power, you’ll be happy to hear Swiss tuner Dähler has a stage 1 kit that unlocks 402 bhp and 457 lb-ft while getting rid of the top speed limiter. Stage 2 lifts the output numbers furthermore to 435 bhp and 472 lb-ft.

Unfortunately, the tuner doesn’t say anything about how the power gains have boosted performance, but surely this BMW Z4 tricked out by Dähler will eclipse the standard car’s 4.4-second sprint to 60 mph. It likely reaches a top speed higher than the electronically governed 155 mph just about all German performance cars are fitted with as standard.

To send out that Z4 M vibe, the sporty roadster has gained the signature M circular quad exhausts replacing the pair of angular finishers of the warm M Performance version. A spoiler lip has been added at the front bumper for extra effect, while the stock wheels have been swapped out for a larger 21-inch set of the tuner’s own alloys and wrapped in skinny Michelin tyres.

Rounding off the changes are the suspension lowering springs bringing the droptop closer to the road. Alternatively, customers can go for a coilover suspension adjustable in height and hardness. Future upgrades planned by Dähler include a plug and play module “for an additional increase in agility,” a glass wind deflector, and a more sophisticated coilover suspension.

These Z4s will only exist in Photoshop:

The eagerly yearned new Z4 Roadster is finally here and now earns the predicate "sporty". And after the performance and optimization treatment by Dähler, the predicate "sports car" is well deserved, too. The new roadster, which has been comprehensively redesigned and improved by Dähler Competition Line AG from Belp near Bern in Switzerland, is now available as a Z4 M40i "DÄHLer competition line" in order to hop in and drive off!

Roadster rides are a true pleasure – no matter with the roof open or closed. A fascination of a very special kind and the continuation of a long tradition. The Z4 M40i "DÄHLer competition line" is not just an eye-catcher, but an extensively optimized curve chaser.

Dähler provided an additional performance cure to the factory-installed engine - in the series: 250 kW (340 hp), 500 Nm (lb-ft 369) - and extracted everything out of the engine, and the entire vehicle, whatever furnishes sense and most fun.