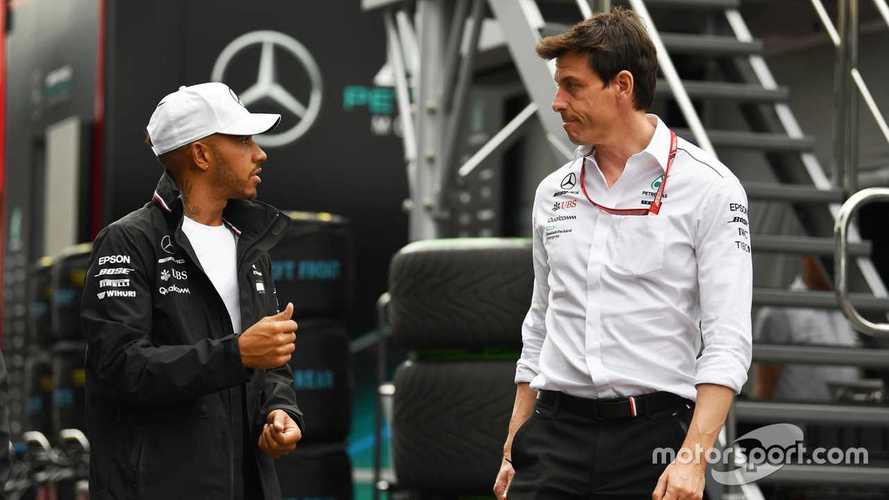 Lewis Hamilton believes Mercedes boss Toto Wolff is the best manager in Formula 1, but the world champion suggests that sport should be run by a neutral rather than someone previously associated with a team.

Wolff has been tipped as a leading candidate to replace Chase Carey as F1's CEO, should the American leave when his contract runs out.

Hamilton, who gained an extra insight into how the sport is run when he attended a recent meeting in Paris about 2021 regulations, says that it would be difficult for anyone not to retain a soft spot for a former employer.

"I don't believe there's a better manager than Toto within the whole of F1," said Hamilton. "However, sitting back as a fan, when you sit in the room with people who ultimately have to make decisions, we as humans are I think – this is just my opinion – we can be biased.

"You've got Jean Todt, I know Jean's level, but the fact is he's been with the red team for so long, so surely when he wakes up if there's a red T-shirt and a silver T-shirt, he probably goes for a red one. You know what I mean? Just like I get out of bed, I see 44 or I see number six, I will go for number 44!

"And Toto has been Mercedes through and through for such a long period of time. I don't know if there's anything in that.

"But if it's a choice of management, I think he would be the best, but I think in the best scheme of things it's someone from outside, who's neutral, if there can be someone who's completely neutral, who doesn't know about Ferrari."

Asked to elaborate on what he learned at the Paris meeting, Hamilton said that the teams have too much influence.

"I think ultimately the FIA, they're the governing body, they need to make all the decisions. The teams shouldn't be involved in that, in my opinion, because the teams all want to do something for themselves. They won't like me saying that, but ultimately that's the natural thing.

"It would be the same if all the football teams were sat in a room and said the sport should be like this. They would push and pull for their own benefit. Whereas if you get a central group of people, intelligent, like the FIA for example, their sole job with Liberty is to make the sport great again.

"Whether that means hiring individuals or whatever. But they should have the power and just make the decisions. Currently if they were to do that they don't always necessarily have the right answers."

Hamilton admitted to some frustration when talk in the Paris meeting turned to further increasing the minimum car weight in 2021.

"The car is already 130kgs heavier or whatever it is than when I first got to the sport, and what they don't know is we've got the best brakes you can possibly have, they're as great as they can be, and they're overheating and they're fading, so the braking zones aren't great.

"If you put the car another 30kgs heavier, it's just going to get worse for the brakes and the car, and you have to do more lift and coasting, you have to do more fuel saving, all these different things, it just has a knock-on domino effect. But now with the drivers in there, maybe there'll make a lot of noise."