New Defender profile leaks via its own instrument cluster 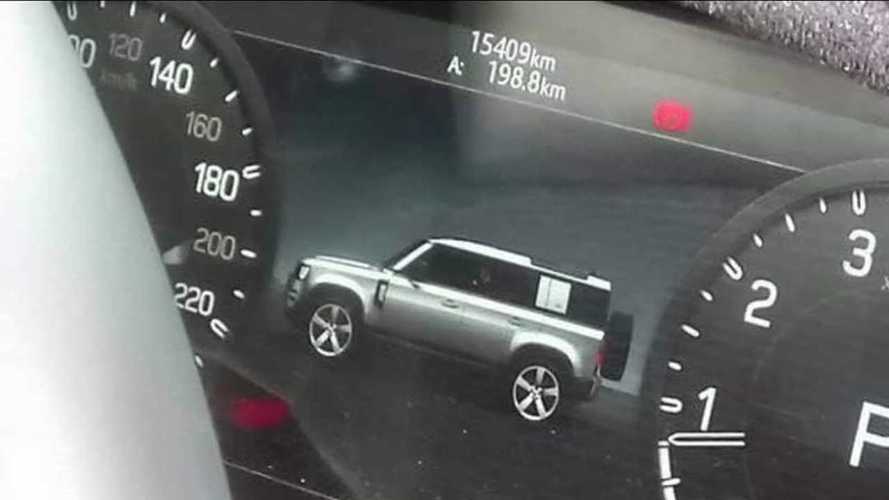 As boxy as ever, this next-gen Defender is the long-wheelbase model with four doors.

It was only just recently when our spies sent us a comprehensive batch of images with the 2020 Land Rover Defender and now the iconic off-roader is back to reveal its side profile on social media. As shown in a photo published on Instagram revealing the fully digital instrument cluster of a prototype, the Mercedes G-Class rival is a long-wheelbase variant with four doors and a rear-mounted spare wheel.

In a world of curvy SUVs, it’s refreshing to see the Defender will remain as boxy as ever. It certainly looks promising from what we’re able to see, and it reminds us of the DC100 concept from 2011 by blending the classic shape with modern touches in a bid to please everyone. The white roof appears to incorporate a glass panel at the back, while the thick “floating” C-pillar is bisected by the outline of the rear door.

A closer look at the front fender wings shows a vertical vent, although we’ll have to wait and see whether that’s actually functional or if it’s there just for décor. A subtle bulge of the bonnet is noticeable, as are the black side mirror caps and a classic five-spoke alloy wheel design. This four-door variant is just one of the many body styles Land Rover has prepared for the new Defender, with a shorter two-door model also planned along with quite possibly a single cab pickup truck among other variations.

Interestingly, the prototype has been used extensively by test drivers as the digital odometer is showing 15,409 kilometres (9,575 miles). The parking brake light is on, which means the Defender was caught while standing still in an unknown location. Its digital speedometer appears to go beyond 220 kph (137 mph), but it’s safe to say very few people will ever be curious enough to test the SUV’s top speed.

According to recent reports, the new Land Rover Defender will premiere in September, presumably at the Frankfurt Motor Show.

The Latest About The Defender's Much-Awaited Return: