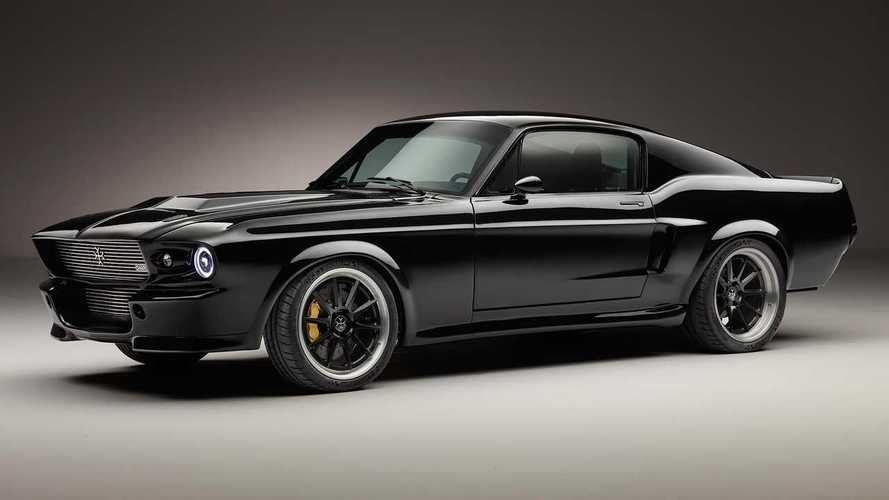 It looks like a fairly standard Mustang on the outside, but there's a tablet that looks straight out of a Tesla on the inside.

Ford is currently working on an electric crossover with a Mustang-inspired design, but if you prefer a more classic look, check out the new Mustang EV from Britain's Charge Cars. Attendees at this year's Goodwood Festival of Speed can see it on display at the automotive event's Michelin Supercar Paddock.

Don't worry about Charge Cars slicing up authentic Mustangs from the 1960s because the firm uses officially licensed, modern shells as a starting point. Rather than a V8 thumping under the bonnet, each wheel has an electric motor for power, giving the vehicle all-wheel drive. In total, these motors produce 536 bhp and 885 pound-feet of torque. A 64-kilowatt-hour battery pack powers the system.

How about the Mustang-inspired electric SUV that's coming:

With this ample power, Charge Cars claims that its electric Mustang can reach 60 miles per hour in under 3.99 seconds and reach a top speed of 149 mph. The driving range is an estimated 200 miles.

From the outside, Charge Cars' electric Mustang features an aggressive take on the classic look due to elements like a bulging bonnet, grille extending into the lower fascia, and spoiler sculpted into the boot lid. The video below offers a brief look at the cabin that has a large tablet on the centre stack. The Tesla-like display lets drivers control things like toggling between rear- or all-wheel drive and selecting the suspension mode.

Charge Cars only plans to build 499 examples of its electric Mustang. Prices start at £300,000. If that price is too steep, at least people can see one at Goodwood. While it launches as a fastback coupe, the company's earlier announcement indicates that the firm intends to offer a convertible version, too.

British start-up Charge Cars is proud to debut its fully electric Mustang at this year’s Goodwood Festival of Speed.

The prototype vehicle will be on display in the Michelin Supercar Paddock – which hosts the most advanced cars in the world.

Goodwood Festival of Speed will be the first time the vehicle has been officially displayed, marking its global launch to the industry and public.

Vadim Shagaleev, CEO of Charge Cars, comments: “We are extremely proud to be partnering with Michelin to unveil our fully electric Mustang at the Goodwood Festival of Speed; one of the biggest, most exciting motorsport events in the world. Our fully electric Mustang is built not only on cutting edge technology and expertise, but immense passion – from our love of preserving iconic design to our belief in an emission-free future”

The Charge vehicle is built using officially licensed Ford Mustang shells from the 1960s, with components supplied by EV technology company Arrival. Only 499 versions of the classic redesign will be built, with prices starting from £300,000.

Peter Shaw from Michelin UK, who worked with Charge on tyre selection, said: “The torque produced is phenomenal, but that’s all wasted if power isn’t transmitted to the road properly. The Michelin Pilot Sport Cup 2 tyres allow the driver to make the most of the technology and the set up and the feedback they give is second to none. This has been a really exciting project – and the end result is stunning.”