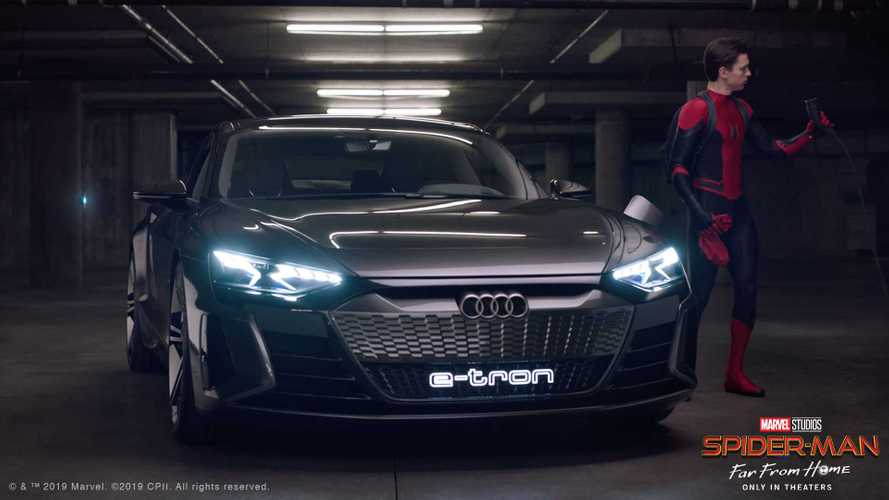 We begin this story with an Avengers: Endgame spoiler alert. Actually, scratch that – the movie has been out for two months, which in the Marvel Cinematic Universe equates to approximately 3000 years so yeah, Tony Stark – a.k.a Iron Man – is dead. Audi was consistently the automaker-of-choice for superhero Stark, but in the real world, the Hollywood - Ingolstadt relationship endures with the latest Marvel-themed Audi short film featuring Spider-Man.

What’s the crux of this extended Audi commercial? Peter Parker and Ned are trying to win the school’s science fair, and they get some help in the form of the company’s e-tron GT concept car. There’s more to it than that, obviously – the science fair “emergency” requires quick action from Spider-Man to save the day, which invariably sees the superhero slinging his way through the city. And because this is really a lengthy Audi commercial, there are plenty of close-ups with Peter Parker driving the e-tron in a spirited manner, hoping to reach the school before it’s too late. Naturally, Spider-Man saves the day, which in this case means nabbing second place. Perhaps they would’ve won if Peter and Ned had known the e-tron GT concept’s electric range when the judges asked.

Audi had a similar video promoting its e-tron SUV leading up to Avengers: Endgame back in April. In that spot, Bree Larson’s Captain Marvel was briefed on the production SUV’s capability before launching into all-out war with Thanos. Ironically, Captain Marvel’s role in the blockbuster was rather small, but Audi’s presence in the film certainly didn’t go unnoticed.

As for the upcoming Spider-Man movie, Audi says the e-tron SUV will make an on-screen appearance, along with the A7 and Q8. Spider-Man: Far From Home is slated to hit theatres in the UK on 2 July.

HERNDON, Va., June 19, 2019 – Audi has teamed up with Sony Pictures Entertainment to release exclusive digital content ahead of this summer’s upcoming film, “Spider-Man: Far From Home.”

The digital short titled “Science Fair,” features Peter Parker (Tom Holland) and his best friend Ned (Jacob Batalon), up against some very serious competition at the school science fair. To save their presentation, Peter races against time to acquire the perfect scientific advancement: the all-electric Audi e-tron GT concept.

“Teaming up with Sony Pictures to showcase the latest step in Audi’s evolution—electrification—gives us a unique opportunity to better socialize this important technology with a highly engaged audience,’’ said Loren Angelo, vice president of Marketing, Audi of America. “Peter Parker represents the continuing high-tech evolution of the Audi storyline within the Marvel Cinematic Universe."