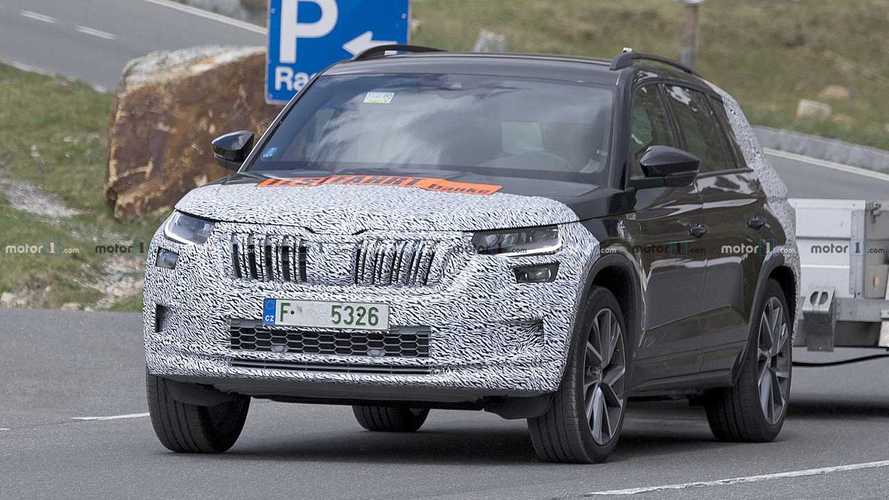 The largest of the three Skoda SUVs is getting ready for a mid-cycle refresh.

After Skoda’s apprentices had their fun turning the large SUV into a one-off Mountiaq pickup truck, it’s time for the big boys and girls to get down to some serious business by preparing a facelift for the Kodiaq. The flagship SUV of the brand has been spotted undergoing testing for the first time, and it appears we’re dealing with the Sportline trim judging by the namesake badge on the front fender wing and also by the alloy wheel design.

Even though there’s plenty of camouflage at the front, the bumper is already showing off a new design that better lives up to the trim’s “Sportline” name as it’s a tad bit more aggressive. With the Superb facelift getting matrix LED headlights, we have a feeling the seven-seat SUV will also benefit from the high-tech setup.

The shape of the main clusters is unlikely to change that much seeing as how the ones of the Superb have been largely carried over. To the disappointment of some people, it appears the two-tier headlight setup will continue in the latter half of Kodiaq’s life cycle, while the taillights are set to go through discreet changes with sequential LED turn signals as seen on the Kamiq.

With wires sticking out of the prototype’s back and going into what looks like a trailer, we have a feeling the Kodiaq was actually towing a dynamometer as it was the case with the Aston Martin DBX earlier this month. If our assumption is correct, it means Skoda was testing a new powertrain. Looking at the changes the Superb has gone through, the Kodiaq is expected to get the VW Group’s cleaner 2.0 TDI Evo that was first seen in the Euro-spec Passat facelift.

See different flavours of the Kodiaq:

Of course, the biggest change will be the adoption of a plug-in hybrid system also inherited from VW’s flagship saloon in GTE guise. Already featured in the Superb iV, the PHEV setup will combine a 1.4-litre TSI four-cylinder with an electric motor, a six-speed DSG, and a 13-kWh battery pack. The combustion engine is going to deliver 156 bhp whereas the electric motor will be good for 115 bhp. This will enable a combined output of 218 bhp.

Expect the electric range to be in the same ballpark as the Superb iV’s WLTP-certified 34 miles. The charging port will be neatly integrated into the grille and will remain completely concealed when not in use. Bear in mind the Superb iV has a lower cargo capacity than the conventionally powered models, so it could be the same story with the Kodiaq. That shouldn’t be much of an issue since the SUV has loads of room behind the seats, albeit in seven-seat form the cargo capacity drastically decreases.

With the all-new Octavia expected to take centre stage at the Frankfurt Motor Show in September, the refreshed Kodiaq might not be unveiled until March 2020 in Geneva.