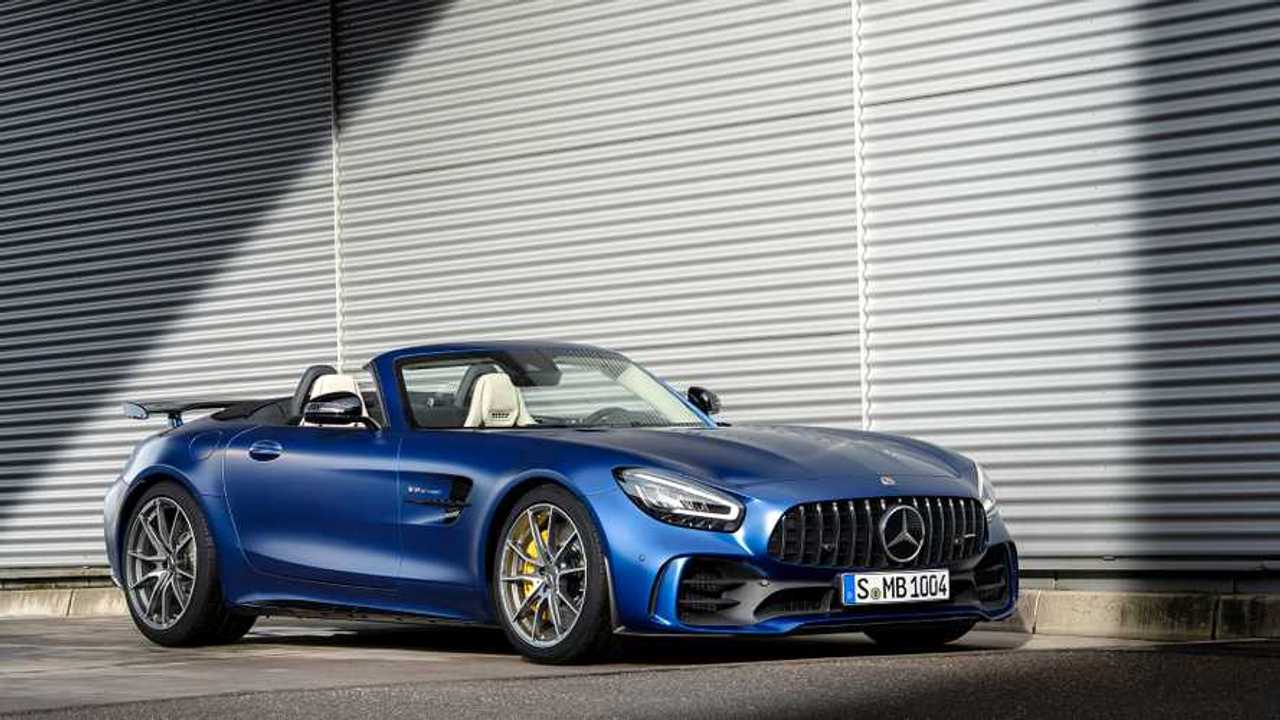 Like the coupe version, it's really, really fast. Unlike the coupe, it doesn't have a roof.

Mercedes-AMG Details most powerful 4-cyl ever

Like its hard-top sibling, which launched earlier this year, the roadster is fitted with a same 4-litre twin-turbo V8 engine that churns out 577 bhp. That’s enough for a 0-62 mph time of just 3.6 seconds and a top speed of 197 mph - a number Mercedes claims is not chosen by the laws of physics, but the car’s electronic speed limiter.

And the similarities continue on the outside, where the Roadster gets the same outlandish styling tweaks as its tin-top brethren. The front end is more aggressive than that of the ‘standard’ AMG GT models, and there’s an enormous wing tagged onto the rear end. And as with the GT R coupe, adjustable dampers and four-wheel steering make an appearance, too.

Also included in the £178,675 price tag is an active aerodynamics system, which is designed to offer “more precise handling and better road adhesion”, while an AMG performance exhaust and drive selector system come along for the ride. And that’s before we mention the yellow brake callipers or the adaptive cruise control that maintains a safe distance to the vehicle in front.

But unlike the GT R Coupe - a car that’s more than £34,000 cheaper - the GT R Roadster comes with a fabric hood. Although while we might say ‘a fabric hood’, Mercedes-AMG calls it a “triple-layered lightweight fabric soft top” with a structure comprising aluminium, magnesium and steel.

And the whole lot features an “acoustic mat” (that’s sound deadening, to you) designed to drown out the noise from the fat tyres and whopping great V8 hiding under the bonnet. In the event of a sudden heatwave or downpour, the roof can be raised or lowered in 11 seconds, and at speeds of up to 31 mph.

Under that triple-layered, lightweight hood, the GT R comes with plenty of toys. The leather-trimmed ‘climatised’ seats come with heaters and fans that send warm air around your neck, while there’s a 12.3-inch digital instrument cluster and a 10.25-inch infotainment screen. Meanwhile, if the V8’s vocal range isn’t aural entertainment enough, there’s a high-end Burmeister surround sound system for your music.

If you want to spend even more money on your Merc, you can choose the optional AMG high-performance ceramic composite braking system. Based on the brakes used in racing cars, they are designed to be more resistant to heat, meaning they ‘fade’ less on race tracks. In the case of the GT R Roadster, though, they also cost £5,995.

The GT R Roadster is available to order now, with the first customer deliveries expected this autumn.