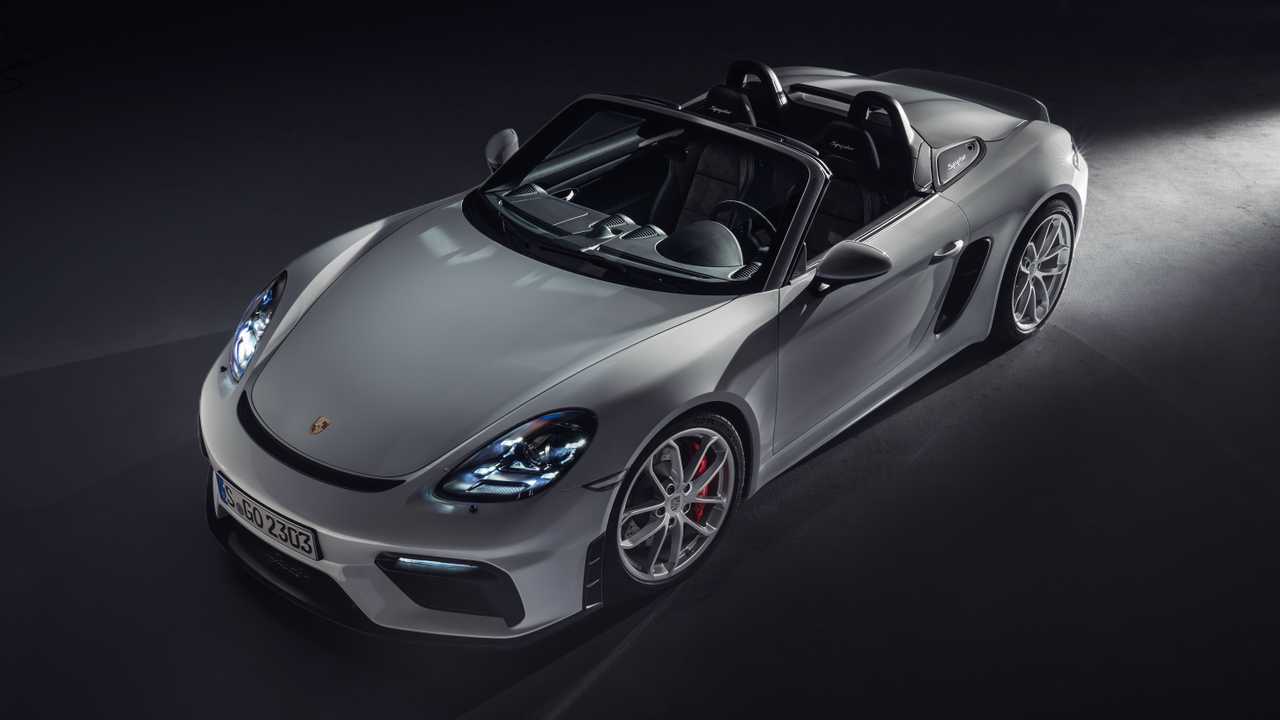 Naturally aspirated. Six cylinders. Porsche’s GT boss, Andreas Preuninger, need not say more. We’re near Weissach, Porsche’s technical base, and getting a sneak peek at the new 718 Cayman GT4 and 718 Boxster Spyder. Yes, these are the official cars. Cease all internet-fuelled rumours and speculations.

2020 Porsche Taycan spied in detail with barely any camo

Powering these sports cars is not a variant of the 911 GT3’s high-revving 4.0-litre flat-six, the engine many expected Porsche to squeeze into its mid-engine models, but a new six-cylinder engine. Loosely based on the 9A2 flat-six from the 911 Carrera range, and built on the same production line, the engine that powers the high-performance 718 twins features kit such as cylinder deactivation and piezo fuel injectors.

Redline is a sky-high 8,000 rpm, while the engine’s approximately 414 bhp peak at a heady 7,600 rpm and its 310 pound-feet of torque is available between 5,000-6,800 rpm. Those figures allow both the GT4 and Spyder to reach 62 mph in 4.4 seconds and hit top speeds of 188 mph and 187 mph, respectively. Both models retain manual transmissions, although the gearboxes are saddled with lengthy gear ratios that allow the duo to pass various emissions regulations. Meanwhile, weight rises to more than 1,400 kg (3,100 lb); an almost 90-kg (200 lb) gain over the previous models.

Most of the extra fat is attributable to pesky things such as a pair of exhaust particulate filters, as well as the implementation of an automatic stop/start system, which requires the addition of a bigger starter and battery. Still, Preuninger reveals that the actual weight difference between these new cars and their predecessors is only about 30 kg (66 lbs) and that the aforementioned, three-figure difference is merely the result of changes to homologation standards and reporting. Whatever the number truly is, we believe Preuninger when he tells us drivers won’t notice the cars’ additional mass from behind the wheel.

Preuninger says the GT4, in particular, is at least 10 seconds a lap quicker around the Nurburgring relative to its forebear. Helping the model achieve this feat are major aerodynamic advancements, including a large underbody diffuser that makes 50 percent more downforce than the last GT4’s. Wheels and tyres carryover and the car's lightweight 20-inch alloys wear the latest Michelin Pilot Sport Cup 2 tyres measuring 245/35 up front and 295/30 at the rear.

Additional performance enhancements include the Porsche's latest torque vectoring setup, a mechanical limited-slip differential, new dampers, and more. The suspension includes active dampers and the ride heights for the GT4 and Spyder are some 30 millimetres lower than any other 718 model.

The GT4 also comes with the option of a Clubsport package. This includes a rear steel roll cage, a hand-held fire extinguisher and a six-point seatbelt on the driver’s side.

Nevertheless, these are track-oriented vehicles first, and track rats will welcome the cars’ adjustable toe, camber, and roll bar rates. Most buyers will probably avoid breaking out the tool kit, though, and will instead simply press the Sport button to stiffen up the adaptive dampers. Additional dynamic tech includes an automatic rev-matching feature and access to the Porsche Track Precision App, which lets drivers geek out on lap times and the like.

Available to order from today, the Spyder wears a price tag of £73,405.00 RRP, while the GT4 stickers for £75,348.00 RRP. No, they aren't cheap. But given their six-cylinder engines and notable performance capabilities, the latest Cayman GT4 and Boxster Spyder strike us as relative bargains.

Hungry for every curve and optimised for the racetrack

Stuttgart. The 718 family welcomes new members: with the new 718 Spyder1) and the 718 Cayman GT42), Porsche introduces two particularly emotional and powerful top models to claim top spot in the model series. Their pure character will appeal to sports car enthusiasts who delight in unadulterated driving pleasure and appreciate a high level of agility and an almost intimate proximity to the centre of power. The perfectly balanced mid-engine concept offers all this. For the first time ever, the 718 Spyder and the 718 Cayman GT4 share a technical base. This includes the newly developed four-litre six-cylinder naturally aspirated engine, together with a six-speed manual transmission. The boxer engine generates 309 kW (420 PS) in both models. Whilst the GT4 represents the entry-level GT road model from Porsche, the Spyder lends itself to all kinds of curves. Both rely on highly efficient aerodynamics, a full GT chassis and powerful brakes.

High-revving and highly emotional naturally aspirated engine
At the heart of both models is the new four-litre six-cylinder boxer engine. The naturally aspirated engine is based on the same engine family as the turbo engines in the current 911 Carrera model series. The new high-revving engine generates 309 kW (420 PS) – 35 PS more than in the GT4 predecessor models. The third generation of the Spyder even has 45 PS more. It delivers a maximum torque of 420 newton metres at between 5,000 and 6,800 rpm. The manual transmission sports cars can both break the 300 km/h barrier: the 718 Spyder has a top speed of 301 km/h, whilst the 718 Cayman GT4 can reach 304 km/h. Both models accelerate to 100 km/h in 4.4 seconds from a standing start. The correlated fuel consumption of the mid-engine sports cars is 10.9 l/100 km according to the New European Driving Cycle (NEDC). The fascinating character of this naturally aspirated engine combines a modern gasoline particulate filter emission control system with the linear power delivery and the immediate response of a GT engine. It has a maximum engine speed of 8,000 revolutions. The unparalleled boxer sound remains untouched. New additions include technical highlights such as adaptive cylinder control. In part-load operation, it temporarily interrupts the injection process in one of the two cylinder banks, thus reducing fuel consumption.

Piezo injectors are used for direct fuel injection for the first time ever in a high-revving engine. They split each injection process into up to five individual injections. This supports a complete – and therefore emissions-friendly – combustion process. A variable intake system with two resonance valves ensures optimum gas exchange in the cylinders.

Aerodynamic efficiency: more downforce, the same drag
Among the striking features of the 718 Cayman GT4 is the comprehensively improved aerodynamics concept. It produces up to 50 percent more downforce, without adversely affecting drag – proof of outstanding efficiency. The aerodynamics of both models benefit enormously from the newly designed single-chamber arch rear silencer: it creates space in the rear section for a functional diffuser, which accounts for a good 30 percent of the downforce at the rear axle in the 718 Cayman GT4. The fixed rear wing is also marked by greater efficiency: it produces around 20 percent more downforce compared with its predecessor. This corresponds to an additional downforce of twelve kilograms at 200 km/h. The front section, which is optimised in the GT style, maintains the aerodynamic balance with a large front spoiler lip and so-called air curtains. The latter calm the air flow along the front wheels.

Porsche 718 Spyder: an open-top road sport car with lightweight convertible top
The new 718 Spyder is a pure machine for driving pleasure with a lightweight convertible top that can cope with top speeds. It continues the history of such famous Roadsters as the Porsche 550 Spyder and the 718 RS 60 Spyder. Open or closed, it thrills with a captivating silhouette. The roof is suitable for everyday use and can be stowed away under the boot lid in just a few steps. Unlike the GT4, the 718 Spyder has a rear spoiler that comes up automatically at 120 km/h. Thanks to the functional diffuser, it is the first model in the Boxster family to generate aerodynamic downforce at the rear axle.

High-performance GT chassis: optimised for best dynamics
For the first time ever, the 718 Spyder benefits from the high-performance GT chassis of the 718 Cayman GT4. With its superior cornering dynamics, it provides an emotional driving experience. Its further refined lightweight spring-strut front and rear axles make use of racing technologies. The direct connection to the chassis is partially by means of ball joints. The Porsche Active Suspension Management damping system with 30 mm lower suspension lowers the centre of gravity and improves lateral dynamics potential. It is specifically designed for use on the racetrack and makes the handling characteristics of the 718 Cayman GT4 sharper. The 718 Spyder also benefits from this design. The Porsche Stability Management (PSM) operates with even greater sensitivity and precision here but can optionally also be deactivated in two steps. Porsche Torque Vectoring (PTV) with mechanical rear differential lock further enhances the longitudinal and lateral dynamics, cornering performance and driving pleasure. The GT4 also comes with the option of a Clubsport package. This includes a rear steel roll bar, a hand-held fire extinguisher and a six-point seatbelt on the driver’s side.

Gripping: powerful brakes, ultra-high-performance tyres
The high-performance brake system in the 718 Spyder and 718 Cayman GT4 provides consistent braking that is suitable for track driving thanks to large aluminium monobloc fixed-calliper brakes. The Porsche Ceramic Composite Brake (PCCB) is also available as an option. One new feature is that the 718 Spyder now runs on ultra-high-performance (UHP) tyres specially adapted by Porsche. They are part of the overall package that makes the 718 Cayman GT4 fly on the Nürburgring “Nordschleife”: its lap time on the 20.6-kilometre classic racetrack is more than ten seconds faster than its predecessor.

The new Porsche 718 Spyder and the 718 Cayman GT4 are available to order now. In Germany, prices start at EUR 93,350 for the Spyder and EUR 96,206 for the Cayman GT4 – each including VAT and with country-specific equipment.