It's our best look yet the entry-level SUV from Mercedes.

After refreshing the A-Class, B-Class as well as the CLA saloon and estate duo while throwing the A-Class Saloon / Saloon L and GLB into the mix, Mercedes is now focusing on the GLA. The company’s smallest SUV has just been spotted patiently waiting at a red light in a German intersection with a new-gen A-Class hatchback right behind it.

The prototype belonging to the second generation of the GLA was carrying around the full production body and the final headlights. We can also observe it even had a sunroof and shiny door handles, while the taillights extended onto the tailgate to reveal their final shape. Although the man with the camera was not able to have a proper look inside the cabin, he did zoom in to show the predictable dashboard design already seen on the other new-era compact Mercedes models. 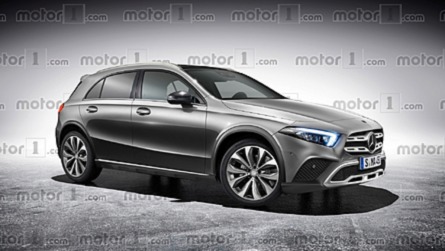 We’re not entirely sure, but the new GLA appears to be a tad larger than the current model. It won’t be much of an issue since the seven-seat GLB is significantly bigger (almost as large as the GLC) despite being labeled as a compact crossover, so the base SUV from Mercedes has room to grow without the risk of stepping on the new member’s toes.

With Mercedes deciding to slap so much camouflage onto the prototype’s body, we have a hard time believing the revamped GLA will be introduced in September at the Frankfurt Motor Show as the rumour mill alleges. The three-pointed star might decide to wait for the Los Angeles Auto Show in the latter half of November or even for Geneva set for March 2020. As you may recall, NAIAS will be moved from January to June beginning with next year’s edition.

Like it is the case with the other compact Mercedes models, expect a myriad of versions for the GLA lineup, topped by the 35, 45, and 45 S AMGs with as much as 416 bhp for the flagship.