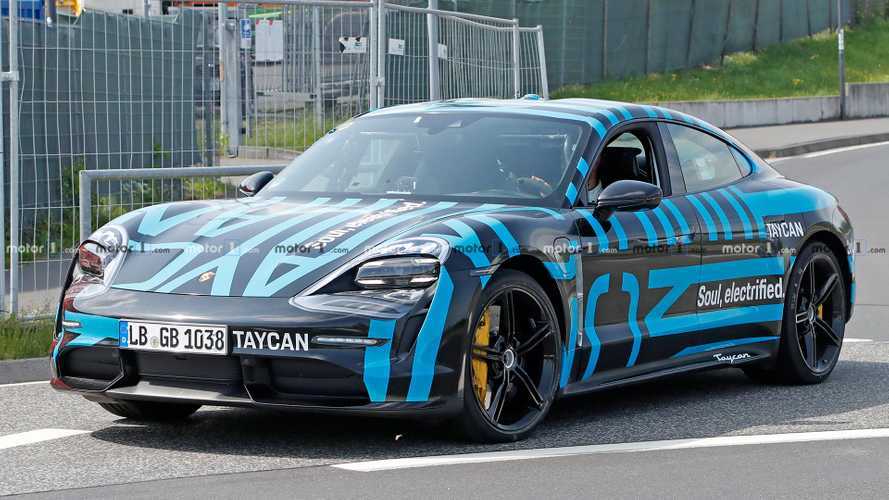 Putting the model name on the camouflage is an odd touch.

The Porsche Taycan gets a fresh camouflage body wrap in these new spy shots, but the concealment doesn't hide much about the vehicle. In fact, anyone who takes a look at this car would immediately know it's a Taycan because the name appears on the front bumper, side sills, rear wing, and trunk lid.

This new Taycan test mule doesn't reveal any major design tweaks in comparison to older ones. The vehicle continues to have a low-slung nose with oddly shaped rectangular headlights. The front brake calipers are absolutely gigantic. You can also spot the cover for the charging port on the driver side front wing. This vehicle has a racing seat and roll cage for testing. At the back, Porsche continues to include ludicrously large fake taillights. The skinny strip of LEDs are the only truly functional part. Unlike previous development vehicles, this one no longer has fake exhaust pipes as part of the camouflage.

The two earlier spy shots (above) provide our only unconcealed view of the Taycan's cabin. The driver gets a digital instrument panel, and it appears that the glass panel that stretches across the dashboard in front of the passenger might be a display, too.

Porsche reports that the Taycan can hit 62 miles per hour in less than 3.5 seconds and have a 310-mile range. To test the machine, the company instituted a massive development campaign that included 3.728 million miles of on-road testing and 6.2 million miles of driving in the virtual world.

The Taycan's debut will come before the end of the year, and the Taycan Cross Turismo estate will expand the lineup in 2020 by adding a more spacious variant. More EVs will follow them.