New BMW X5 M brings its 600 horses to the Nurburgring

Unless this is the Competition version, in which case we're dealing with 617 bhp.

It’s only the beginning of June and BMW has already released four fully-fledged M models: X3 M, X4 M, M8 Coupe, and M8 Convertible. All have hotter Competition flavours and optional M Performance Parts, and there’s more to come as we will probably see at least two other models before the end of the year. One of them will certainly be the all-new M3, while the other is expected to be the X5 M. Earlier this week, several prototypes wearing full camo attire were spotted at the Nürburgring where BMW is putting the finishing touches on its M-badged behemoth. 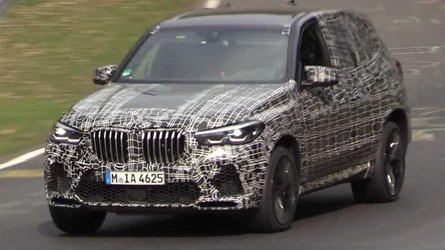 BMW X5 M spied on video running around the Nürburgring 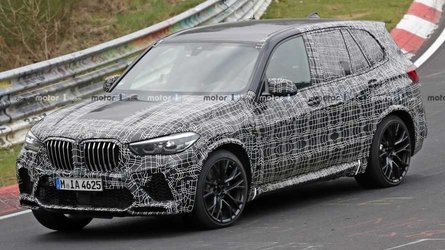 It’s tricky to know for sure whether this is the regular X5 M or the amped-up Competition version, but we’re definitely looking at a midsize SUV that packs at least 600 bhp. Should it be the range-topper, it means the twin-turbo 4.4-litre V8 delivers an astounding 617 bhp as seen in the Competition-spec M5 and M8.

The V8 rumble is right up there with the soundtrack provided by the next-gen Mercedes-AMG GLE 63, and although we’re still not used to the idea of an SUV on a track, the X5 M looks quite agile given its size and weight. While the M5 and the M8 have drift modes by offering selectable rear-wheel drive, it remains to be seen if X5 M and its swoopy X6 M sibling will get the tail-happy arrangement.

Because the X5 M is carrying some extra weight compared to the M5, it won’t be able to match the saloon’s 0-60 mph sprint of 3.2 seconds, nor will the Competition version complete the task in 3.1 seconds. Expect these sprints to take a few extra ticks of a second, but that won’t really matter for the SUV-loving crowd.