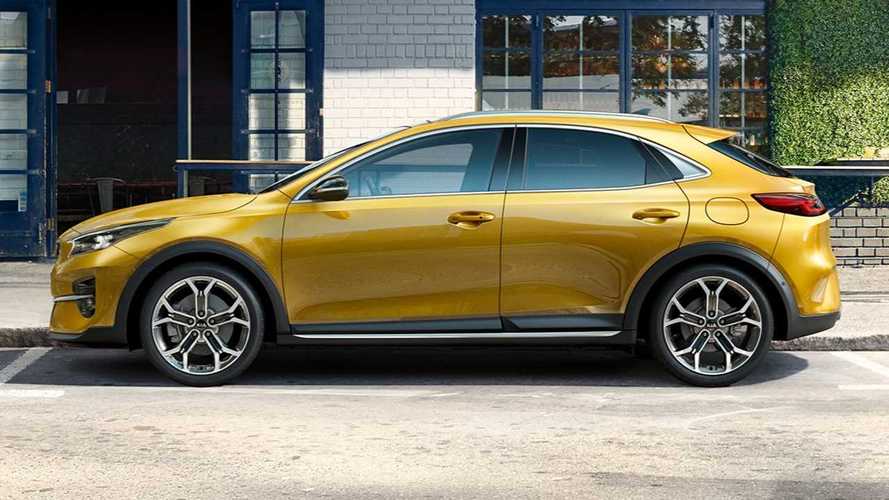 Kia says it has a coupe-like profile, but we're not seeing it.

While North America, India and other parts of the world are about to receive the Seltos compact crossover, Europe is getting ready to meet the XCeed. It’s the fourth member of the Ceed family after the hatchback, estate, and the stylish Proceed “shooting brake” and will slot underneath the Sportage in the company’s high-riding portfolio. Will it clash with the smaller Stonic? Kia doesn’t seem to think so as the two will peacefully coexist in the company’s ever-growing lineup.

For the time being, Kia is only sharing a single image showing the side profile of the XCeed. Finished in a vibrant colour, the model appears to be a jacked-up version of the Ceed hatchback rather than a true crossover. It’s got the usual ingredients: plastic body cladding, lifted suspension, roof rails, and side mouldings at the bottom of the doors.

In a bid to separate it from the standard five-door hatch, Kia’s designers from its European centre in Frankfurt, Germany have modified the roofline to give it a slightly sweptback look. We wouldn’t go as far as saying it is “coupe-like” as mentioned in the press release, but we can at least give credit to Kia for not carrying over the hatchback’s roof.

Kia isn’t going into any details about engines, but surely the XCeed will borrow the mechanical bits from the other members of the Ceed family. As such, expect a turbocharged three-cylinder 1.0-litre to power the base model with 118 bhp, with the more expensive ones getting the larger four-cylinder 1.4-litre rated at 138 bhp. Kia might also throw in the 1.6-litre diesel with 114 bhp and quite possibly a plug-in hybrid setup with a petrol mill. Both a six-speed manual gearbox and a dual-clutch, seven-speed automatic transmission should be on the menu.

Despite its crossover genes, the Kia XCeed is expected to be offered exclusively with a front-wheel-drive layout since none of the other Ceed models or the Stonic come with an all-paw setup. If you want AWD, you’ll have to step up to the Sportage.

The full reveal is scheduled for 26 June. UK on-sale date, specification and pricing will be announced at a later date.

What we know about Xceed:

Kia Motors has released the first image of the all-new Kia XCeed urban crossover, due to be revealed later in June 2019. Stylish, expressive and modern in design, the new crossover utility vehicle (CUV) represents a sporty alternative to traditional larger SUVs.

The swept-back, coupé-like appearance of the Kia XCeed is a product of the brand’s European design centre in Frankfurt, Germany, designed under the direction of Gregory Guillaume, Vice President of Design for Kia Motors Europe. The combination of its elevated ride height and lower hip point give the car a sportier driving position than a traditional SUV. Its raised driving position offers a clearer view of the road ahead than a conventional family hatchback.

More emotional and dynamic in format and design than its taller rivals, the Kia XCeed will nevertheless offer comparable levels of interior space and luggage capacity to Europe’s best-selling SUVs.

Emilio Herrera, Chief Operating Officer at Kia Motors Europe, comments: “The sporty design and demeanour of the new Kia XCeed CUV makes it more innately desirable than many taller, larger SUVs. Yet it offers this without compromising on versatility, with its intelligent packaging achieving the cabin and storage space of an SUV in a sportier body and more compact footprint.”

The all-new Kia XCeed will be revealed in full on 26 June. UK on-sale date, specification and pricing will be confirmed in due course.