Bottas: Verstappen 'kept drifting to the right' in pitlane incident 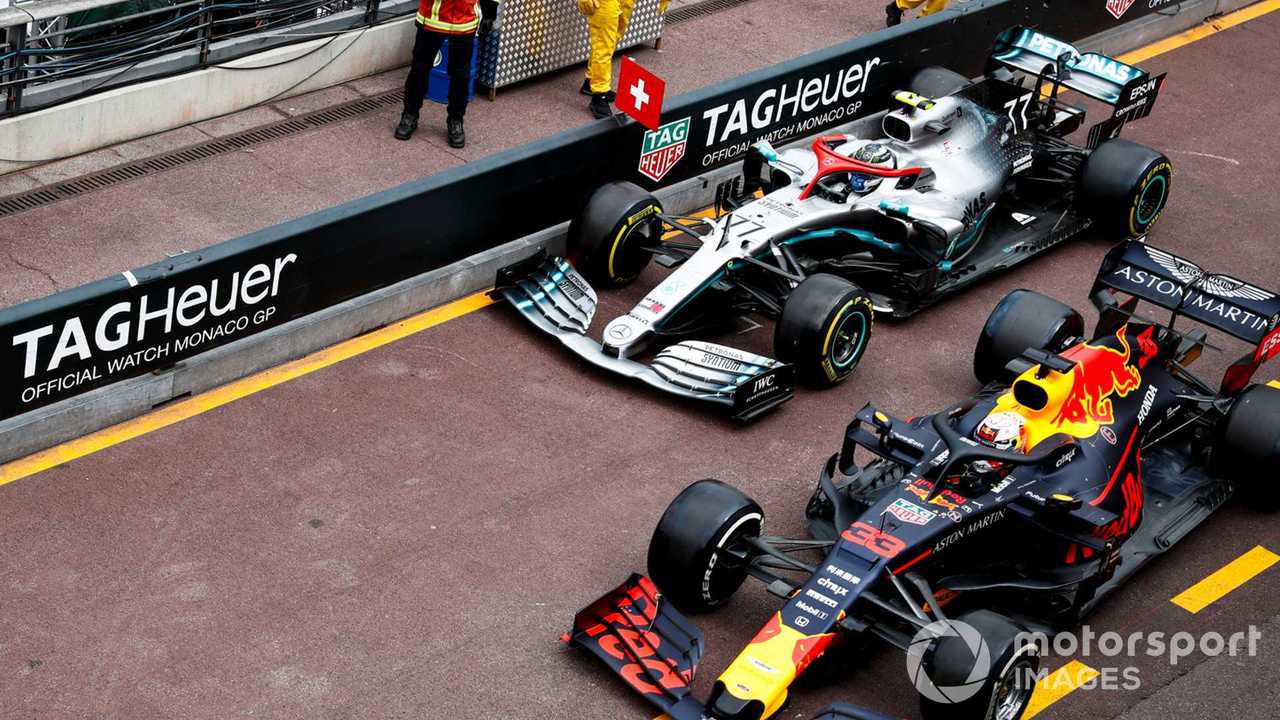 Valtteri Bottas says Formula 1 rival Max Verstappen "kept drifting to the right" during their pitlane incident in the Monaco Grand Prix, which he feared had been ruined.

Bottas was running second behind teammate Lewis Hamilton when the safety car was triggered early in the Monte Carlo race, and a slightly faster pitstop meant Red Bull released Verstappen into Bottas's path in the pitlane.

The two made contact and Bottas was forced to nudge the wall on his right-hand side, breaking his wheel and forcing him to make a second stop.

He was able to make that under the safety car and only dropped to fourth behind Sebastian Vettel, which became third at the finish thanks to Verstappen getting a five-second penalty for the incident.

"That was the thing that made the race really more difficult," said Bottas. "We stopped the same time as Lewis, I made a gap between us before we stopped.

"For some reason our stop was a bit slow. Max got alongside me in the pitlane even though he was behind before. We were side-by-side, I kept my line and he kept drifting to the right.

"We touched and I also touched the wall because there was no more space. Honestly, I thought when I had had to stop again that I would go to the back of the grid but luckily I only lost one more place. Unlucky but lucky at the same time. It could have been a lot worse."

Verstappen said Red Bull "did everything right" at the pitstop and claimed he was not aware Bottas was next to him.

"I didn't know there was anyone next to me because they released me," he said. "I was just going, it was all getting a bit tight. We were ahead but it was a shame that we touched. I couldn't see him."

The stewards deemed Verstappen breached Article 28.13a of the sporting regulations, which states cars "must not be released from a garage or pit stop position in way that could endanger pit lane personnel or another driver".

Unlike Article 28.13d, which explicitly refers to a car "deemed to have been released in an unsafe condition" and demands a 10-second stop-go penalty, the rule Verstappen was determined to have breached does not carry a specific penalty.

Therefore, in accordance with recent precedent for the same offence, he was handed a five-second time penalty and two penalty points.

Asked by Motorsport.com if he felt that punishment was sufficient, Bottas said: "It's a tricky one because there is no way I could ever gain back the positions I lost, except at least Max's position with his penalty.

"But the position I lost to Sebastian there's no way I'd ever gain it back. He did his penalty, I think it's OK. There's not much to say more than that."