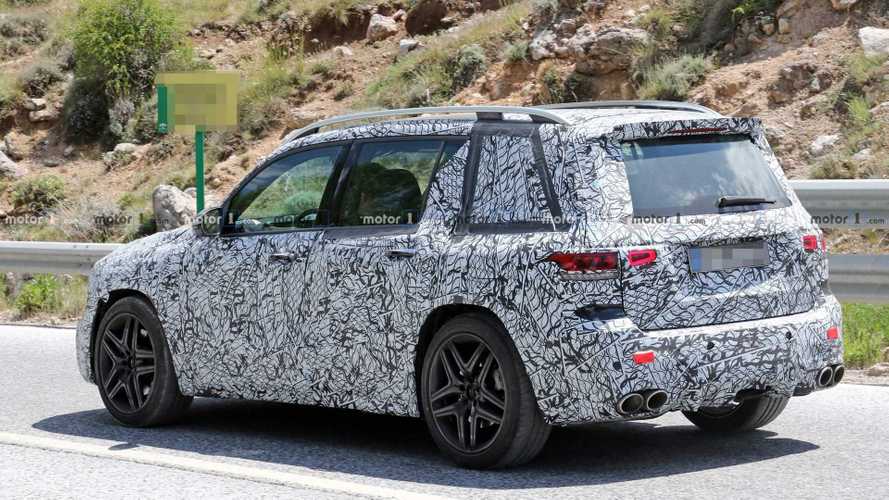 Those snazzy quad exhaust tips are a dead giveaway.

Hot on the heels of the latest Mercedes-AMG A45 hot hatch sighting comes this, our first look at the GLB 45 hot SUV. There’s certainly some symmetry here since the GLB-Class is based on the same platform underpinning the A-Class, and as such, we suspect the GLB 45 will make use of the same horsepower options already confirmed for the A45.

Compare these shots to the GLB 35:

More on that in a bit, but for now, how do we know this is a GLB 45 prototype and not the lesser GLB 35 that we’ve already seen? The rear fascia reveals the true nature of this SUV, as it sports larger cutouts for quad exhaust tips – a hallmark of all top-tier AMG variants. There’s also a subtle diffuser tucked between those tips, something not seen on the GLB 35. Additionally, there is the smallest of roof spoilers on this tester, mounted just above the rear glass. That could change as development progresses, but it’s certainly a clue to the added performance existing under the bonnet of this small SUV.

Speaking of which, the GLB 45 will likely make use of the same tuned-up 2.0-litre turbocharged four-pot powering the forthcoming A45. Here’s where it gets interesting, because in that application the engine develops either 383 bhp or 416 bhp – representing the standard A45 or the up-spec A45 S. Will Mercedes offer a similar choice for the GLB 45? The bones are already there so it shouldn’t be a difficult step to take. However, the GLB 45 should be a bit heftier than the A45, so skipping the lesser mill for the full monty might make sense as well.

In either case, we’re very early in the GLB 45 timeline so it will likely be some time before any rumours are confirmed. We’re still waiting for Mercedes-Benz to reveal the standard GLB-Class, which is confirmed to happen this summer. Following that will be the GLB 35 that could appear later this year, so don’t expect a GLB 45 reveal until 2020.