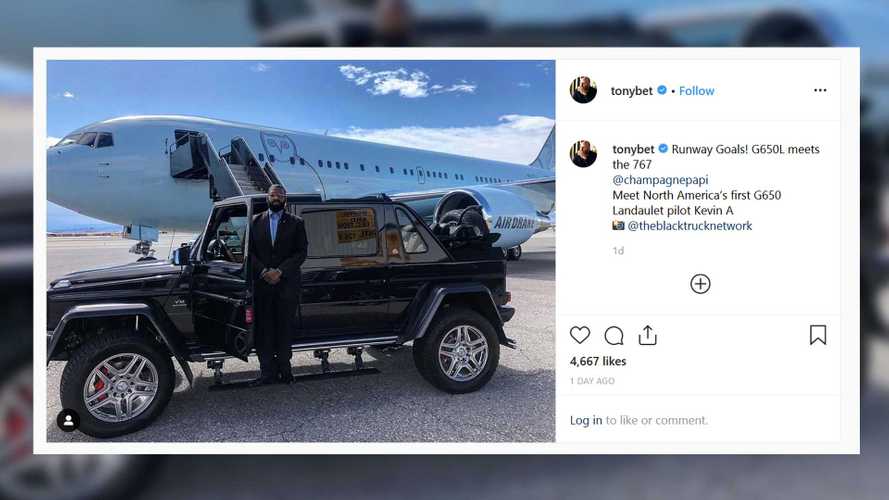 The music star has the only one in all of North America.

We cover celebrity content from time to time, especially when it involves an impossibly expensive luxury SUV parked on a runway in front of a Boeing jumbo jet owned by the same person. We’re talking about Drake, the Canadian rap star and all-around music mogul who has a penchant for showing off just a bit. Then again, if we had a private Boeing 767, we’d probably show off too.

For our purposes, the focus here is on the snazzy SUV as featured by Tony Bet on Instagram. Don’t you dare call it a Mercedes G-Class, or even an AMG G65. This is a Mercedes-Maybach G650 Landaulet, and we’ll forgive you if you can’t instantly rattle off the stats for this posh ride. That’s because only 99 G650s went into production, each brandishing a 621-bhp V12 and riding on a wheelbase stretched upwards of 585 mm, all to ensure for proper Maybach performance and legroom for passengers front and rear.

Speaking of which, those rear-seat passengers can enjoy open sky courtesy of a folding roof while lounging in lavish seats flanking a massive console equipped with heated and cooled cup holders. A centre divider can separate the front seat occupants from those in the back, and lest we forget the G650’s off-road capability. It does have G-Class DNA, after all.

It’s unclear what Drake paid for the privilege of owning the opulent, exceedingly rare ride. Daimler never revealed an official price when the G650 initially launched back in March 2017, but unofficially it was thought to cost over £500,000 pounds. Take that with a grain of salt, however, since the last one built sold for over £1 million in October of that year.

As we can see from Tony Bet’s Instagram page, Drake’s certainly been enjoying it as-of-late so the high cost doesn’t seem to be any concern. Then again, when you can afford your own airliner, a million-dollar SUV is the automotive equivalent to super-sizing your fast-food dinner.