The modified bonnet hints at something more powerful lurking underneath.

Much like Honda has been spotted cooking up something with the Civic Type R, its archrival from France is about to get an update. We strongly believe this is the hotter Megane Trophy-R version judging by the new bonnet featuring a scoop flanked by a pair of air vents. It looks a bit weird because there seems to be a layer of disguise on top of the bonnet to conceal the design.

Although not immediately noticeable, some plastic cladding finished in just about the same white shade as the rest of the body has been applied on both sides of the hot hatch. We’re not seeing any changes at the back, but that might be because Renault didn’t install all of the production bits on this prototype. Of course, there’s also the possibility the Trophy-R will carry over the rear end of the non-R variant. Some changes to the exhaust are expected to denote the model’s higher position in the Megane lineup.

The hottest Megane of them all is coming... 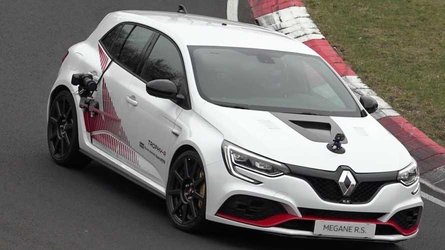 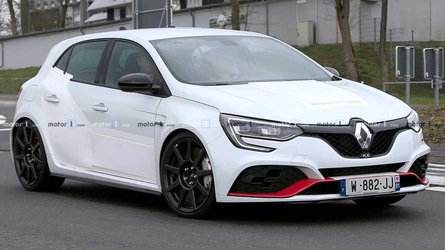 If the new stripped-out Megane RS will be similar to its predecessor, it’s bound to lose some serious weight as the old one managed to shave off 100 kilograms (220 pounds) in its quest to become the fastest front-wheel-drive production car at the Nürburgring. That was nearly five years ago, when the old one came out without the rear seats and less sound-deadening material. It also lost the audio system and air conditioning in the process, while the brakes and battery were lighter than what other Meganes had.

It remains to be seen whether the new Trophy-R will be as exclusive as the one before it, which was limited to only 250 units for the entire world. An official reveal is expected to take place later this year, quite possibly in September at the Frankfurt Motor Show. Are we looking at a new FWD ‘Ring holder? Time will tell.