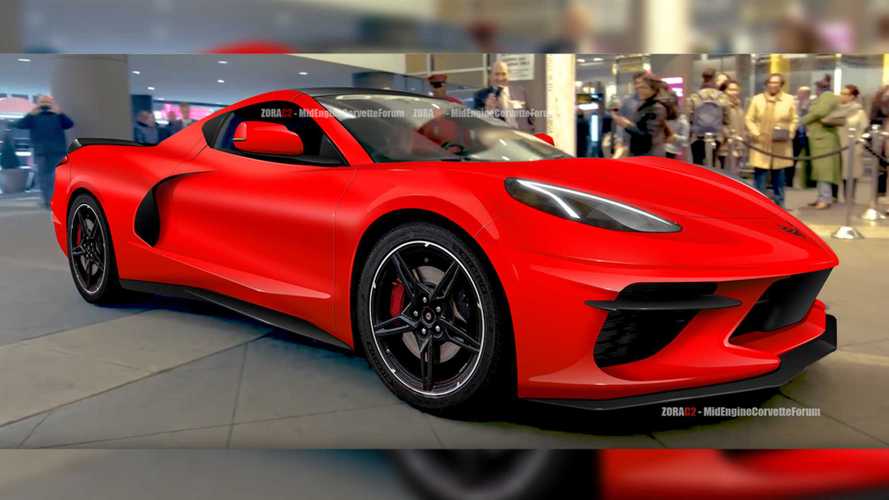 It's a different look than what we've seen on previous renderings.

Sightings of mid-engined Corvette prototypes have risen significantly in the last six months or so, and as a result, we’ve seen numerous fan renderings of what the actual next-generation ‘Vette from Chevrolet might look like under the camo. Most recently we’ve seen prototypes sporting bulky, curvy doors, and we assumed there were fake body panels underneath the camo wrap to obscure details. A new rendering posted by MidEngineCorvetteForum.com user ZoraC2 imagines those curves as part of the final design, leading to a softer, more rounded version of the forthcoming supercar. Compare the spy shots from @Bluekts we saw last week on the left, with ZoraC2's rendering on the right.

ZoraC2 discusses some of the details regarding the rendering in the original forum post. Note the continuous curve to the side vents as opposed to the angular shapes we’ve seen on other renderings as well as prototypes. The headlights also swap sharper edges for curves on this interpretation, and the bonnet has fewer body lines for a smoother, more organic appearance. Looking closely at the top of the windscreen you’ll notice a carbon fibre roof option. A carbon treatment is also given to components up front as well as the side rocker trim and rear spoiler.

It’s an interesting interpretation of Chevrolet’s upcoming supercar, which thus far has been portrayed with harder edges. Even with those sharp lines, more than a few people have compared the C8 to the 20-year-old Ferrari 360, and this softer vision certainly goes further in that direction. Having seen so many prototypes wearing various camo coverings and false body panels, at this point it’s still pretty tough to nail down details of a final design. This one, however, definitely extends the softer theme further than any other rendering we’ve seen.

What do you think of this C8 interpretation? July 18 is the date when all the coverings will be removed, but until then, do you think the next-generation Corvette will sport more curves, or edges?