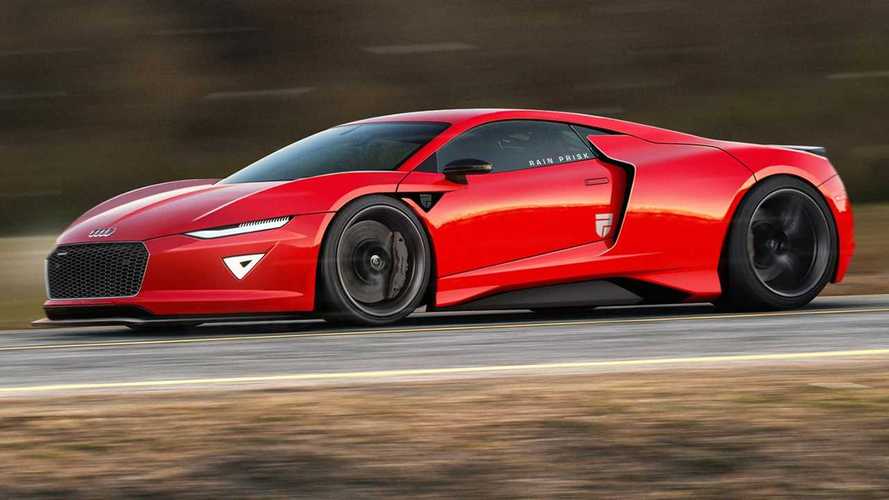 What if Audi lets the R8 live?

Evidence continues to mount that the Audi R8 doesn't have a third generation on the way. However, talented rendering artist Rain Prisk now imagines a brighter future where the German supercar survives a little longer.

Prisk's design blends elements from the existing R8, the PB18 E-Tron Concept, and some of his own cues. Like the previous two generations, this model has a low-slung nose with an angular grille. There are skinny LED strips for headlights and odd-looking triangular driving lamps underneath them.

What's the future for the R8?

Audi could save the TT and R8 by electrifying them

The R8's distinctive sideblades are still present on Prisk's rendering of a third-generation model, but they would probably look better in a contrasting colour in the manner that many customers order the stylish design element. The extremely low roofline and flat rear deck might negatively affect outward visibility for someone driving this fictitious supercar.

While the R8 is likely nearing retirement, rumours suggest that Audi is preparing a new supercar with a fully electric powertrain. The Four Rings would allegedly call the model the E-Tron GTR, and it would have an output around 650 bhp from three electric motors. A 95-kilowatt-hour battery allegedly provides a range of roughly 300 miles (483 kilometres). Support for wireless charging would mean that an owner doesn't have to plug in the vehicle for recharging.

Despite rumours of Audi offering the R8 with a twin-turbo V6, company execs remain adamant that the V10 would remain the only engine for the supercar. With the model only likely to remain on sale for a few more years, major powertrain tweaks seem very unlikely because Audi would be more likely to invest in the future rather than a vehicle so close to retirement.