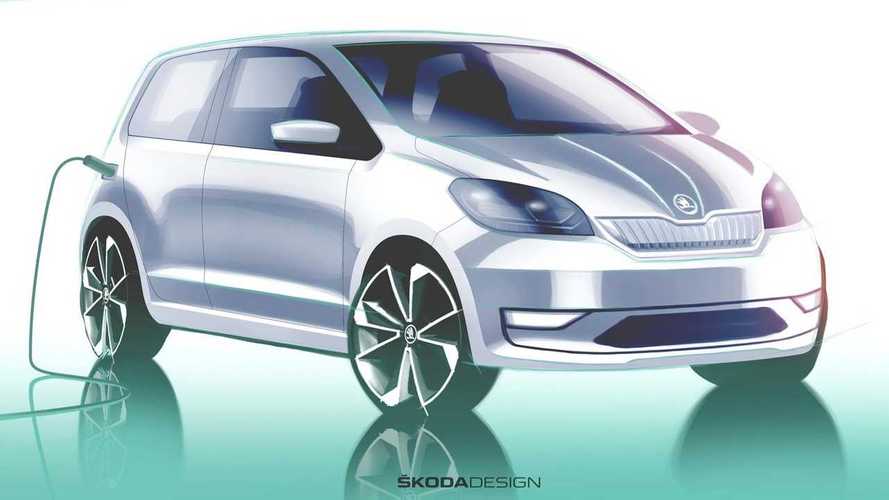 It’s safe to say a new Citigo is long overdue if you take into consideration Skoda’s entry-level car has been around for approximately eight years. The Czech marque part of the Volkswagen empire is about to take the wraps off a heavily modified version of its pint-sized car, even though the styling suggests it’s more of the same. A design sketch announcing the imminent reveal of the zero-emissions Citigo was released today to signal Skoda’s EV ambitions.

Skoda isn’t going into any details just yet, but the adjacent teaser shows the exterior design will be largely carried over from the conventionally powered model. One change we’re able to notice is the closed-off grille, which isn’t really all that surprising taking into account there’s no internal combustion engine (ICE) underneath the bonnet to require cooling. Some subtle tweaks here and there are expected, but nothing to write home about. It goes without saying the actual car will have conventional door handles and will probably be offered strictly as a five-door hatchback.

A sister model of the VW e-up! and SEAT e-Mii, the new Citigo-e iV will offer 186 miles (300 kilometres) of range between charges, although it’s unclear whether that number is based on WLTP or the more realistic NEDC. Regardless, it will have way more range than its VAG siblings, which rely on an 18.7-kWh battery good for about 100 miles in ideal conditions.

The Skoda Citigo-e iV will debut as a production model next week, specifically on Thursday, May 23. The debut is scheduled to take place at a dedicated even organised in Bratislava, Slovakia where the company’s first plug-in hybrid production car, the Superb PHEV, will also grace the stage. Information is scarce at this point, but the electrified derivative of the marque’s flagship is expected to inherit the plug-in hybrid powertrain from the recently facelifted VW Passat GTE for the European market. It will go by the name of Superb iV and will probably combine a 1.4 TSI petrol engine with an electric motor and a 13-kWh battery pack for an electric range of 34 miles (55 kilometers) based on the WLTP cycle.