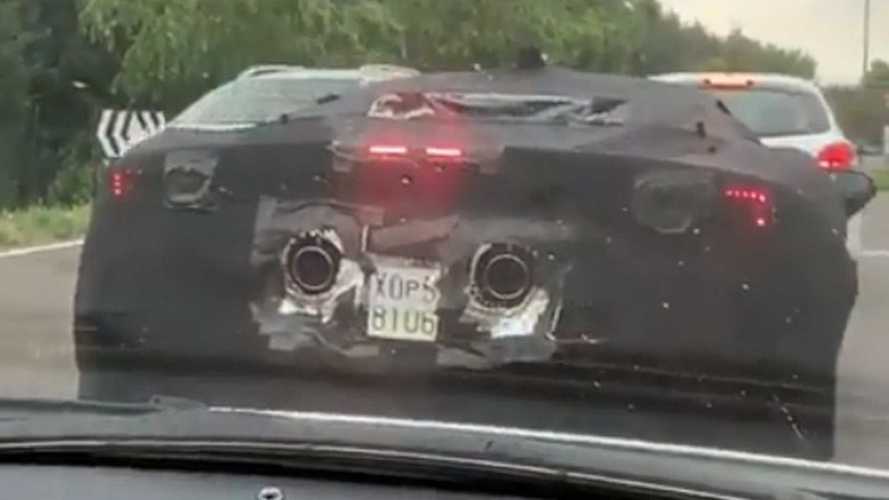 It takes a Ferrari to keep up with another Ferrari.

With this being a brand new Ferrari, we’ll excuse the man with the camera for taking the video in portrait mode like so many other clips posted on social media. What you see here courtesy of 9000lambo user on Instagram is not a 488 Pista prototype the Prancing Horse didn’t bother to strip down its camo, but the yet-to-be-named hybrid model set to debut in a couple of weeks. How do we know it’s electrified? There’s a yellow warning label on the left door – a label we’ve seen plenty of times already on other hybrid test vehicles.

Spotted at the heart of Ferrari in Maranello by two folks inside a white 488 Spider, the man behind the wheel of the second hybrid (after the LaFerrari) was not pleasantly surprised to see he was basically being stalked. In an almost hilarious cat-and-mouse game, the test driver attempted to lose the unexpected “stalkers” in a parking lot, but without any success. As a result, there’s now a video on the Internet for everyone to see.

As for the car itself, there’s not much to talk about because of the heavy camouflage. However, we’re able to notice the Pista-like dual exhausts are positioned higher on the rear end. Those dotted, squarish LED taillights are not particularly nice, but they’re likely a provisional setup and will be replaced by something much more appealing on the production car.

In regards to the technical specifications, we only know it will have a combined output of 986 bhp as per a leaked Ferrari invite that surfaced the web a few days ago. It is believed a V8 will be at the heart of the new model from Maranello, with an electric twist for better response off the line. The hybrid aid might also boost efficiency, but let’s face it, who really cares about that in a Ferrari?

The new hybrid supercar – debuting May 31 – will be the second model (after the F8 Tributo) to be revealed in 2019, out of a total of five cars. In just a few short months, we’ll see another electrified Ferrari as the company has already disclosed plans to unveil a V6 hybrid model.

The wait is almost over: