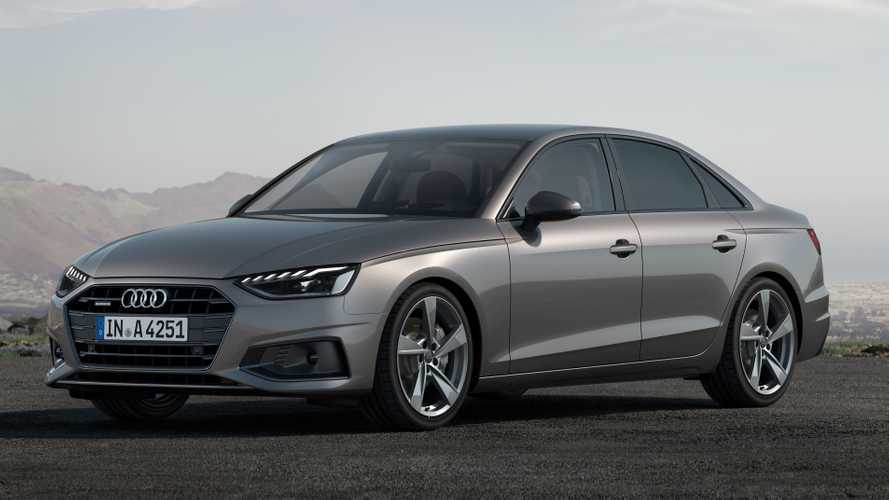 The S4 and Allroad get a nip and tuck as well.

Audi gave the European version of its A4 lineup the slightest of facelifts last year. As we head into the 2020 model year a slightly more prominent update is befalling the full A4 line. We’ve seen spy photos showing long roof Avants playing in the snow with camouflaged front and rear clips, and now we know why. Audi has decided to pull the covers off its entire A4 lineup for 2020, including the discreetly released S4 TDI diesel that broke news at the beginning of May.

For starters, the 2020 A4 line wears a slightly enhanced face. The obvious difference is with the redesigned headlights that eliminate the weird lower notch from the previous model. Less obvious is the refreshed Singleframe grille, which stretches longer across the front for a more horizontal appearance. Conversely, the corner vents on the lower fascia now adopt a vertically themed orientation. Redesigned taillights retain a similar appearance to the outgoing model, while the rear fascia incorporates minor changes to the lower reflectors and exhaust outlets.

The refreshed A4 and S4 are joined by the Avant and A4 Allroad, the latter of which gains a few exterior design tweaks and an extra 35 mm of ground clearance. A4 models can be dressed in basic, advanced, or S line exterior trim, and a new colour called Terra Grey joins the palette. Inside is virtually unchanged, though the car does get updated MMI tech accessible through a large 10.1-inch touchscreen.

Perhaps the biggest news is the expansion of electrification throughout the A4 line. In European markets, Audi will offer six turbocharged engines ranging from 148 bhp to 342 bhp, and three of those powertrain choices will feature 12-volt mild hybrid systems. That sort-of includes the new diesel-powered S4 – we say that because the higher-spec Audi actually incorporates a 48-volt mild hybrid setup with its 3.0-litre turbocharged oil burner. Thusly equipped, Audi says the S4 will reach 62 mph in 4.8 seconds and top out at an electronically limited 155 mph. As you might expect, the diesel S4 is only offered in Europe.

Order banks for the refreshed A4 in the UK open in June with first deliveries in September. Pricing hasn’t been announced for the UK as of yet, but in Germany the A4 starts at €35,900.

Ingolstadt, May 15, 2019 – A more streamlined look and a more contemporary feel – today marks the launch of a comprehensively updated Audi A4 range that moves into step with the latest additions to the Audi family in terms of design and technology and anchors the broad spread of Saloon, Avant and allroad models even more firmly in the vanguard of the compact executive class. The launch is also notable for including high performance S4 variants that travel under TDI power for the first time in the model’s history, and also do so with the benefit of the same independent electric compressor technology that brought the SQ7 so much critical acclaim.

Sharper focus: the exterior design
Newly designed headlights contribute to a favourable first impression in the latest A4 models, and all now use LED technology as standard regardless of version. The lamps flank a broader, flatter Singleframe grille that is complemented by resculpted bumper elements with a more horizontal aspect that emphasises width.

The profile is defined by the distinctive new detailing above the wings and the lower- set shoulder line in between. They form strong contours above the wheels and make the quattro genes outwardly visible.

Inside, an emphasis on horizontal lines also helps to enhance the sense of space, and a new operating system based on the third-generation modular infotainment platform MIB 3 lends an air of even greater sophistication from a technological perspective. Its hub is the large, 10.1-inch high resolution MMI touch display tilted slightly towards the driver in the centre of the instrument panel. Responding to fingertip inputs with acoustic feedback and permitting free text input, it replaces the functions of the previous rotary/pushbutton control on the centre tunnel console. Its graphics are deliberately clean and reductive, and its menu structure with its tight hierarchies is tailored to user expectations and facilitates ease of use. Features such as navigation are now even more versatile and user-friendly as well, particularly when the driver takes advantage of another element of the new system – natural language voice control. The latest iteration of this technology is even more adept at understanding many of the phrases used in everyday speech.

Audi connect infotainment services are installed on an upgradable three-month subscription basis, bringing numerous web-based features such as up-to-the-minute news, Google Earth mapping and Street View and flight, weather, traffic and fuel pricing information. The Audi connect plus portfolio includes a host of additional Car-to-X services taking advantage of the swarm intelligence of the Audi fleet. They include online traffic sign and hazard information, an on-street parking search function and newly introduced traffic light information functionality. By networking with the urban infrastructure, the car receives information from the traffic light central computer via a server so that the driver can choose their speed to match the next green light. The instrument cluster displays a personal speed recommendation as well as the remaining time to the next green light whenever the driver is waiting at a red traffic light. As such, the system promotes an anticipatory, efficient driving style, along with a constant flow of traffic. The function is part of the Audi connect package and is being rolled out in stages in selected European cities.

The all-digital Audi virtual cockpit plus is another standard feature of the latest UK A4 models that underscores their impressive technological emphasis. The driver can operate the 12.3-inch display with full HD resolution using the multifunction steering wheel with a choice of three views.

Numerous driver assistance systems are available to apply high technology to the task of everyday driving. The systems are bundled into the “Tour,” “City” and “Park” packages. An important system in the “Tour” package is the adaptive cruise control including Stop&Go function for automatic distance control. In conjunction with the predictive efficiency assist it can brake and accelerate the A4 predictively even where there is no vehicle ahead. To do so it analyses Car-to-X messages, navigation data and traffic signs.

Broad-based electrification: the drive system
A broad spread of four-cylinder and six-cylinder engines power the first phase of launch models, all of which are at the top of their game, and undercut the limits of the Euro 6d-temp emission standard as proof of that fact. Their power outputs range from 150PS to 347PS – from the Audi A4 35 TFSI up to the Audi S4 TDI. Shortly afterwards, a further two turbocharged engines will be added to the range: the 30 TDI with a power output of 136PS and the 35 TDI with 163PS. The reassurance of quattro all-wheel-drive will be offered as standard for the most powerful TDI and TFSI engines.

For the market launch three engine variants will feature a mild-hybrid system (MHEV) based on 12 volts, which reduces fuel consumption while improving comfort. Another two units are set to follow shortly afterward. This broad-based electrification makes an important contribution to achieving the fleet targets for fuel consumption. In everyday use, the MHEV system reduces fuel consumption by up to 0.3 litres per 100 kilometres according to individual Audi measurements.

Diesel power: the Audi S4 TDI
Both the S models in the A4 family – the Audi S4 TDI and the S4 TDI Avant – are now equipped with a V6 diesel engine. The 3.0 TDI combines substantial torque of 700Nm, smooth running and long range capability and provides a power output of up to 347 PS. It powers the S4 TDI Saloon from zero to 62mph in 4.8 seconds on the way to an electronically governed top speed of 155mph. This combination of power, torque and efficiency makes the Audi S4 TDI unique in the segment.

The V6 TDI works with an electric compressor which facilitates near instantaneous throttle response and virtually seamless power build-up under acceleration by eliminating turbo lag. The compressor is integrated into a new 48-volt main electrical system, which also incorporates the mild-hybrid system. This provides even more efficiency potential than the MHEV system in the 12-volt electrical system on the A4 models. The 12-volt subsidiary electrical system is connected to the 48-volt main electrical system via a powerful DC/DC converter. For the first time a powerful 48-volt belt alternator starter is being used in the S4 TDI as the heart of the mild-hybrid system with a maximum recuperation power of up to 8 kW when braking.

A compact, air-cooled lithium-ion battery with a capacity of 0.5 kWh, which is located under the luggage compartment floor, acts as an energy management centre. The mild-hybrid system on the S models has the potential to reduce customer fuel consumption by up to 0.4 litres per 100 kilometres.

An eight-speed tiptronic and quattro permanent all-wheel drive complement the sophisticated powertrain, and S-specific sport suspension delivering outstanding composure and control is of course standard. Inside and out, a host of design details point to the unique position of the S models – from the quad exhaust tailpipes to the S mode in the display of the standard Audi virtual cockpit.

Beyond its raised ride, the A4 allroad quattro stands apart from its A4 Avant counterpart through details such as the underbody protection and wheel arch trims, and also through its wider track – six millimetres wider at the front and 11 millimetres at the rear. As in the A4 Avant, the luggage compartment has a capacity of 495 litres – this increases to 1,495 litres with the rear seats folded down and cargo loaded to the roof.

Three engine variants are available – one TFSI petrol engine and two diesel units – all allied to automatic transmissions as standard.