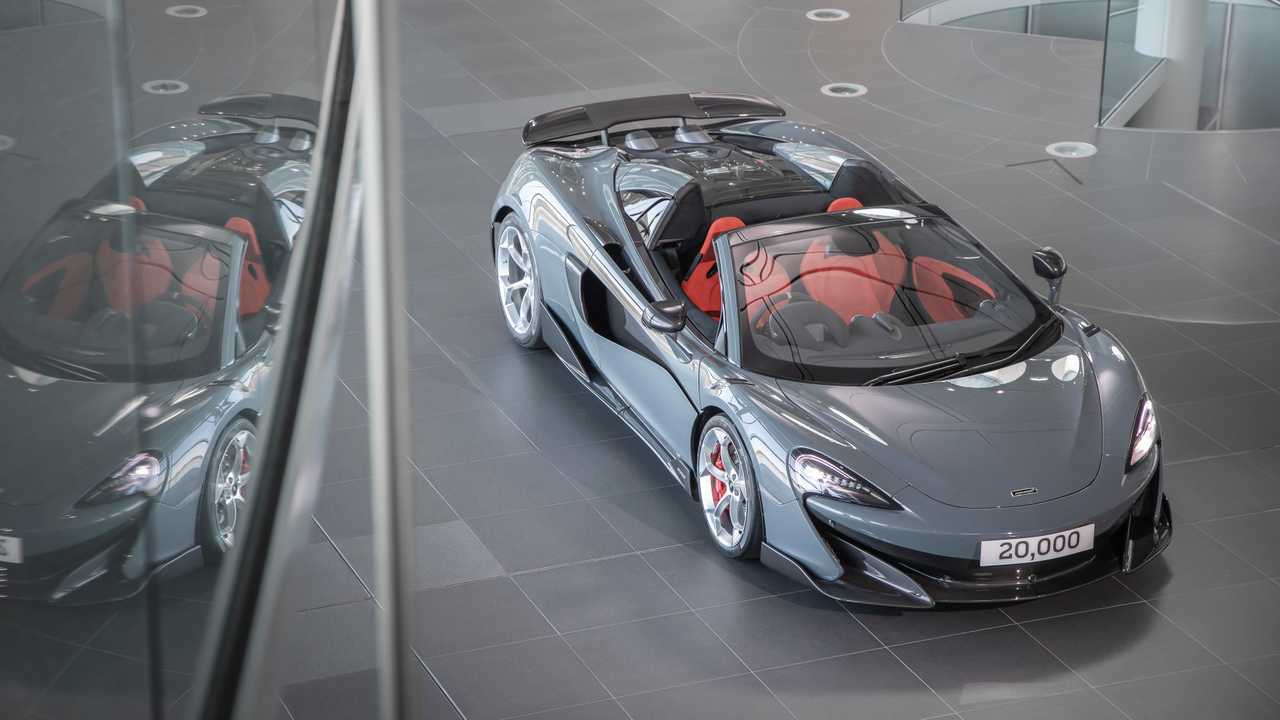 McLaren is keeping an eye on quality and exclusivity, even as they experience exponential growth.

McLaren is celebrating a milestone for the McLaren Production Center in Woking, Surrey, England. Less than eight years after producing their first car at the location, the 20,000th car has been completed.

McLaren Senna drag racing a helicopter is the ultimate battle

The milestone vehicle was a special car in its own right – a right hand drive 600LT Spider in Chicane Grey with a red interior. Its status as McLaren's 20,000th vehicle to be built at MPC will only add to its already impressive pedigree.

The very first car, a McLaren 12C, was produced on July 18, 2011, just 14 months after the ground was broken on the MPC site. McLaren's production has been steadily increasing since then.

In 2018, just over 4,800 cars were produced at the location. McLaren expects those numbers to hover around 5,000 cars per year for the next few years.

Maintaining a sustainable rate of production is a bit of a tightrope act for McLaren. More cars can mean more profit, but, perhaps in this segment more than any other, maintaining bespoke quality is of utmost importance.

Of further importance to McLaren is maintaining exclusivity. Sometime in the next decade, when McLaren increases production beyond 5,000 or so cars per year, don't expect it to increase much beyond 6,000.

In 2016, a second production shift was added to meet rising demand for McLaren supercars. With one shift, the McLaren Production Centre could complete around 10 cars per day. After the addition of the second shift, that number rose beyond 20.

That's an impressive output considering that each car is hand-assembled by a team of experts. For the sake of comparison, a quick Google search reveals that Toyota builds roughly 13,400 cars per day, on average. That's a little less than three years of McLaren production in a single day. With numbers like that, we suppose that McLaren won't have to worry too much about exclusivity.

McLaren Automotive, the luxury British sportscar and supercar company, has celebrated the 20,000th car to be hand-assembled at its McLaren Production Centre (MPC) in Woking, Surrey.

The 20,000th car built was a right-hand drive 600LT Spider in Chicane Grey from the brand’s Sports Series line-up. Launched only last summer as the next chapter in the McLaren ‘Longtail’ story, all production slots for the Coupe variant have already been filled.

This latest milestone represents a further significant achievement for the British marque and comes eight years after the first McLaren road car left the Production Centre in July 2011.

While McLaren’s production reached just over 4,800 cars in 2018 to meet rising global demand, output will remain around 5,000 a year into the next decade before increasing to 6,000 before the end of the current Track25 business plan in order to maintain exclusivity.

The introduction of a second production shift in 2016 to meet rising global demand for McLaren vehicles has seen production double from around 10 cars to over 20 a day. Over 90 per cent of vehicles built in Woking are exported to more than 32 markets around the world.

“Achieving our 20,000th car built is an important milestone for McLaren Automotive. Last year we hand-assembled just over 4,800 cars and we plan to maintain around 5,000 cars a year for the immediate future. While demand for our products continues to grow, we aim to balance that to maintain exclusivity for our brand and our customers. It is fitting that we celebrate this achievement with a 600LT Spider which has been a huge success for us with all production slots for the coupe variant now sold out.”
Mike Flewitt, Chief Executive Officer for McLaren Automotive.

The McLaren Production Centre was designed by Foster + Partners and took 14 months to build from breaking ground in 2010 to July 18, 2011 when the first car, a McLaren 12C, was approved for shipping.

Notes to editors:
A selection of high resolution images accompanying this release is available to download from the McLaren Automotive media site – cars.mclaren.press

Every vehicle is hand-assembled at the McLaren Production Centre (MPC) in Woking, Surrey, England.

Launched in 2010, the company is now the largest part of the McLaren Group.

The company has defined product families: Sports Series, Super Series, Ultimate Series and Motorsport which are retailed through over 80 retailers in more than 30 markets around the world.

McLaren is a pioneer that continuously pushes the boundaries. In 1981, it introduced lightweight and strong carbon fibre chassis into Formula 1 with the McLaren MP4/1. Then in 1993 it designed and built the McLaren F1 road car - the company has not built a car without a carbon fibre chassis since. As part of the Ultimate Series, McLaren was the first to deliver a hybrid hypercar, the McLaren P1™.

Announced at Goodwood Festival of Speed in 2018, the company’s Track25 business plan will see it invest £1.2billion in research and development to deliver 18 new cars or derivatives by the end of 2025.

In 2018, the company launched the 600LT and the first two cars of Track25, the McLaren Speedtail, the next Ultimate Series, and McLaren’s first ever Hyper-GT, and 720S Spider. It also opened a new £50m McLaren Composites Technology Centre in the Sheffield region in the North of England that will see it produce the next generation of lightweight carbon fibre ‘tubs’ that are at the heart of all McLaren cars.

2019 saw McLaren launch the 600LT Spider confirmed as the third car of Track25, with a new GT car announced and the previously-confirmed track-only Senna GTR unveiled.

To support the development, engineering and manufacture of its range of innovative sportscars and supercars, McLaren Automotive partners with world leading companies to provide specialist expertise, technology and solutions. These include Richard Mille, Pirelli, Dell Technologies, Ashurst, AkzoNobel and OnePlus.