2020 Audi RS Q3 spotted with wide body at the Nurburgring 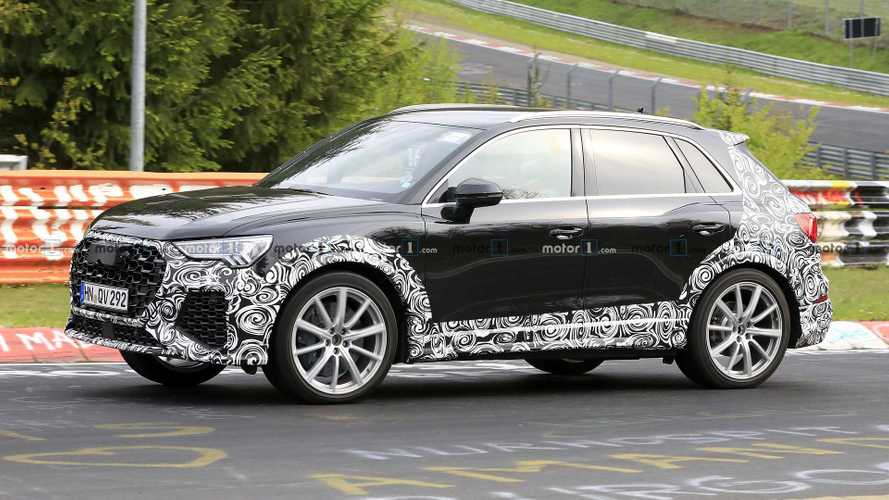 The camouflage isn't really hiding anything.

Much like we’re waiting for Volkswagen to finally reveal the Tiguan R, we’re also anxious to see its higher specification sibling from Audi. We’re talking about the RS Q3, which we know for a fact will be officially revealed before the year’s end based on a product roadmap published by the company’s Spanish division at the end of January.

The RS Q3’s confirmed 2019 debut in Europe is a bit of a surprise taking into consideration Audi has yet to reveal an SQ3. We’ve seen plenty of prototypes flaunting the S-specific quad exhaust tips, but there’s no word right now about when the official debut is slated to take place. It could be unveiled in the months to come in the build-up to the launch of the full-fat RS Q3.

Audi Sport’s range-topping Q3 has been spotted once again testing at the Nürburgring as a partially disguised prototype. The camouflage isn’t really hiding anything, and we can see what looks to be the full production body with the beefier wheel arches and the massive air intakes. The large brake callipers at the front axle along with the oval exhausts represent telltale signs this isn’t an ordinary variant of the luxury SUV, while the lowered ride height also points towards the direction of a performance derivative.

To separate the Tiguan R from the RS Q3, the VW Group will install a four-banger in the former and a mighty five-cylinder in the latter. The 2.5-litre unit is expected to unleash roughly 400 bhp or as much as 414 bhp if we were to rely on the rumour mill. Quattro all-wheel drive is a given, much like an automatic transmission as we wouldn’t hold our breath for a manual.

Aside from launching an RS Q3 and quite possibly an SQ3, Audi Sport is also planning several other hot SUVs, such as the SQ8 and the RS Q8.