We’ve seen many cars – including the mighty Porsche 911 GT2 RS – tackle the Space Shuttle runway with Johnny Bohmer Proving Grounds before, but this one manages to do a bit better than the others. Not only is it the fastest stock GT2 RS that’s ever sprinted the 2.7-mile stretch, it’s literally faster than itself. By the time this Porsche driver lifts off the gas, 219 mph shows on the speedometer, a speed considerably faster than Porsche says the supercar officially goes.

We've been here before: 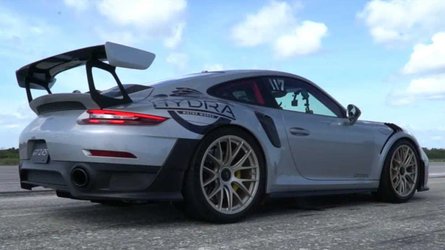 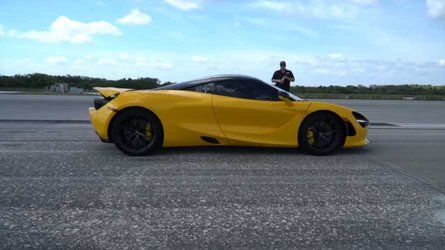 Conditions at the Florida runway may have helped this particular GT2 RS overachieve on its performance. According to the video, temperatures were in the mid-70s F (mid-20s C) with humidity between 60 and 70 percent. Considering the Atlantic Ocean is literally next to the runway, that’s rather low for the area. That also means the runway is virtually at sea level for maximum air density, and it’s so flat that the elevation changes only 6 millimetres across the entire 3.2-mile ribbon of tarmac. It was literally built for spacecraft after all, so terrestrial-based vehicles are able to shine here.

And shine the Porsche does. It’s listed as having no modifications, but even in stock trim, the GT2 RS delivers 690 bhp to the ground thanks to its twin-turbocharged 3.8-litre flat-six. It seems to launch fairly well, though with a manufacturer-published 0-60 time of 2.7 seconds, this specific car seems a bit slow off the line. From there the speedometer relentlessly climbs to triple digits, hitting 100 mph in just 7 seconds, 150 mph in 15 seconds, and 200 mph in 29 seconds. The speed only starts to wane shortly before the 200-mph mark, but it continues a slow-yet-steady ascent to 215 mph and barely manages to click 219 mph before crossing the shutdown line.

Had the driver stayed on the throttle for the full 3.2-mile length, it’s possible the 911 could’ve seen 220 mph. Of course, only 2.7 miles of the runway is used for speed, and even with the half-mile runoff, this GT2 RS needed most of it to pull up. Still, 219 mph isn’t slow by any means.