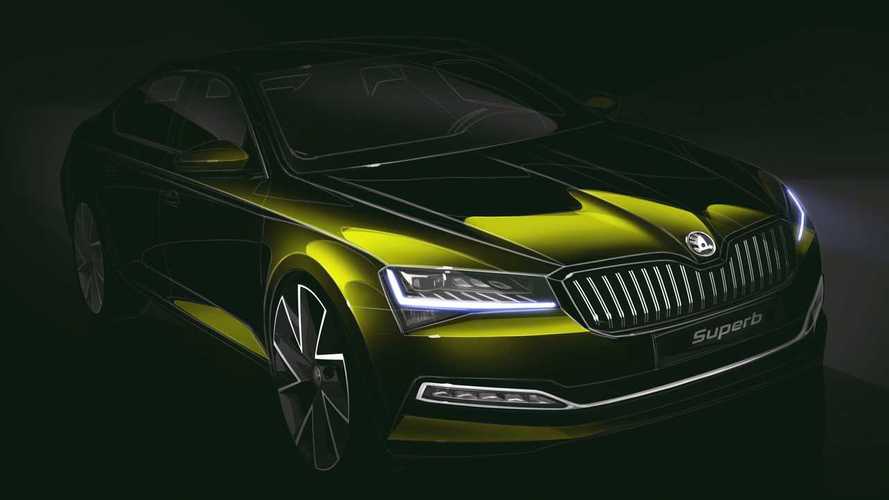 It’s been a long time coming, but the revised Superb is almost here. Skoda has dropped the first teaser image to preview what looks to be a subtle mid-cycle refresh for its flagship model. At a first glance, you’d be tempted to say the midsize hatchback looks virtually the same as the car that’s been around for about four years, but there are some subtle changes at the front fascia.

For example, those headlights – although almost identical in shape with the old ones – are of the full-LED variety to replace the outgoing model’s bi-xenon + LED daytime running lights arrangement. In addition, the corporate grille appears to be slightly wider than before taking into account the edges of the grille now meet the headlight clusters.

Skoda fans will also notice the front bumper has also been slightly modified to accommodate the LED bar of the fog lights replacing the rectangular clusters you’ll find on the pre-facelift Superb. These are interconnected through a chrome strip almost as wide as the bumper to give the car a bit more presence on the road.

An image of the rear end is not available at the moment of writing, but the Czech marque says it has replaced the company’s logo with the “Skoda” lettering on the tailgate. It’s a move we first saw on the Kodiaq GT launched exclusively in China late last year, and since then adopted by the European version of the Kamiq as well as by the Rapid-replacing Scala compact hatchback.

Other details are not available at the time being, but Skoda does promise the facelifted Superb will come along with new “technical features.” It remains to be seen what that means, although we already know the Superb will serve as the automaker’s very first plug-in hybrid, with an electrified setup likely inherited from the Volkswagen Passat GTE facelift.

Skoda will take the wraps off the 2020 Superb facelift later this month during an event it will organise in the Slovakian capital Bratislava as part of the 2019 IIHF Ice Hockey World Championship, which Skoda has been the main sponsor of since 1993.