BMW Z4 by Manhart is an angry yet stealthy roadster 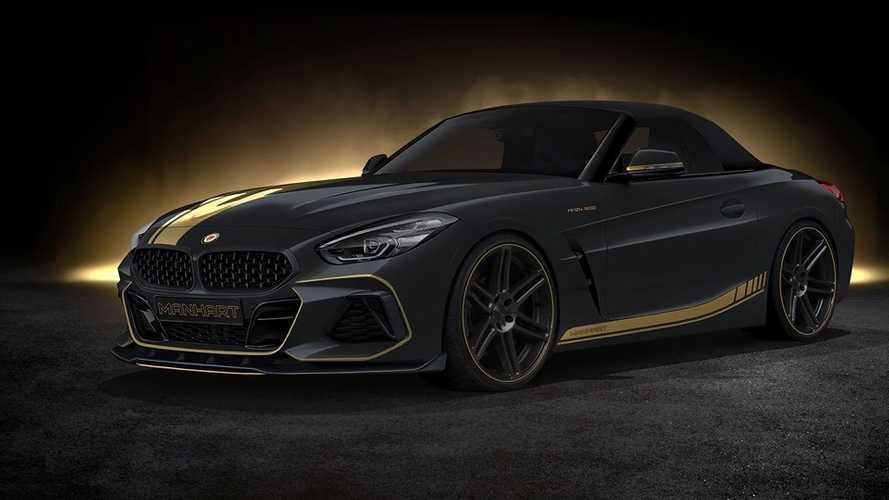 Subtle and sporty is the name of the game for this tuned German roadster.

The German tuning firm Manhart has a well-deserved reputation for tuning BMWs. Recently, their Facebook page shared renderings of their upcoming BMW Z4 tuning package. While mechanical details are thin, we can at least break down the body kit and other visual upgrades.

What's immediately apparent from the renderings is the extensive graphics package. The Manhart Z4 features an offset racing stripe in gold, as well as side stripes that remind us more than a bit of the ones seen on Shelby Mustangs throughout the years.

One major difference, though, is that the stripes follow the sweeping surf line as it curves upward toward the rear wheel. We're glad that Manhart chose to accentuate this part of the Z4's body shape, as that curving surf line has been a part of all three generations of the Z4.

Manhart also accentuated the large openings in the front and rear bumpers with thin gold striping. Drawing attention to these massive air inlets is a bold move by Manhart. While the large scoops are a controversial styling feature to some, we think the car looks great with the stripes – they're the perfect finishing touch.

While the gold striping all over the car may seem a bit over the top to some, Manhart's subtle lip kit is unlikely to draw ire from even the most staunch BMW purists. These additions to the body accentuate the Z4's natural shape and make it seem more aggressive without overpowering the original lines.

In our opinion, out of all of the BMW roadsters produced throughout the company's long history, the newest Z4 is the one that looks the best with its top up. Manhart's additions accentuate this natural, flowing beauty without detracting one bit from the graceful shape of the original.

We're eager to see specifications for the engine and details on the chassis tuning, but until then, these renderings give us quite a lot to look forward to.