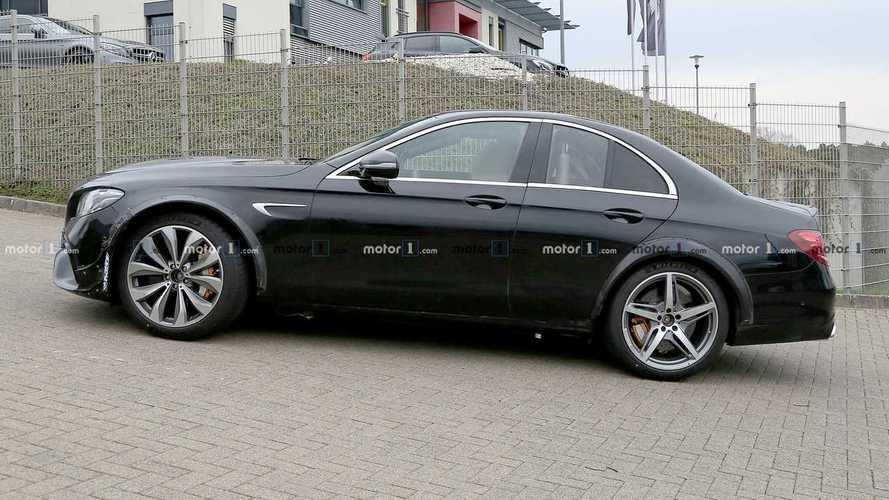 This crunched E-Class saloon could be testing a powertrain for the next SL-Class.

Is it acceptable to refer to these Mercedes-Benz shots as spy photos? There isn’t any camouflage to speak of, except for some tape over the Mercedes star in the grille but honestly, that isn’t fooling anyone. Looking at this car straight on you’d think it must be an E-Class saloon, but then it turns and it’s like wow, how much whiskey was in my coffee this morning?

We've seen this before, sort of:

Shortened VW Beetle looks photoshopped, but it's the real deal
⠀

Yes, these are spy photos, and here’s why. Sometimes, automakers don’t use camo wrap or heavy covers to hide a new model – especially if it’s just the powertrain that’s being tested. This short-wheelbase four-door E-Class might look rather silly, but if the body panels were bolted to the underpinnings of, say, a two-door SL-Class AMG, suddenly the dimensions make sense. And that, folks, is exactly what we think is happening here.

There’s some terrific evidence to back it up as well. For starters, spy photographers at the scene reported this car as having a raucous exhaust note, so it’s not some electric testbed. Furthermore, observe the massive brakes behind the wheels, and if you look really close through the shrunken side window you’ll see what looks like a roll cage. Yes, Mercedes is trying to be sneaky here but the evidence clearly points to some seriously high-performance aspirations with this machine.

A new SL-Class is coming:

But if this an SL-Class test mule, why not simply use the existing SL-Class car instead of some weird Frankenstein saloon? We know a completely new SL is coming for 2021, and just a few days ago we covered an interview AMG boss Tobias Moers had with Autocar in which he says as much. The interview also mentions the new SL being considerably different from the current model – perhaps so much that existing SL-Class chassis just couldn’t cut it.

In any case, expect to see a new SL-Class next year with an AMG variant likely coming for 2022.