All-new BMW 4 Series Convertible caught with the top down 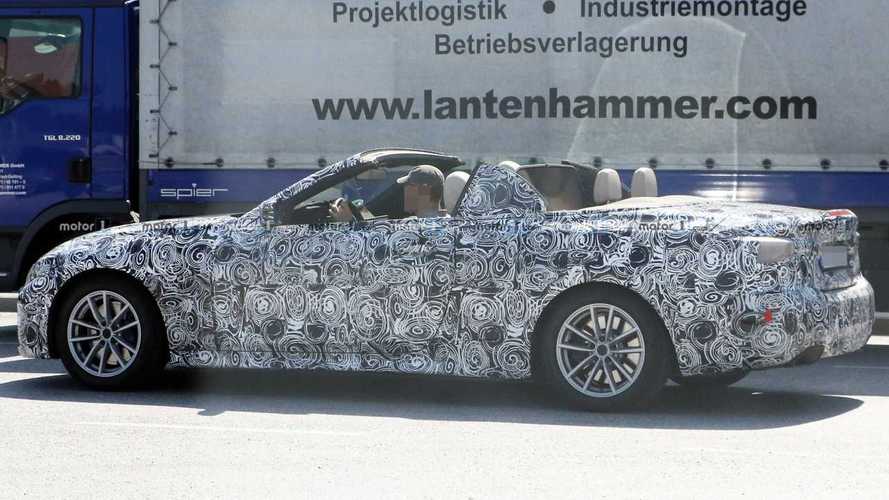 It was a sunny day, so the test driver decided to lower the roof and enjoy the spring weather.

Demand for convertibles is not what it used to be 10-15 years ago, but BMW is confident a new droptop 4 Series still represents a viable business case. Much like the all-new Z4 roadster has reverted to a fabric roof, the larger convertible will also ditch the metal top in flavour of a lighter and less complex roof setup. The major transformation should pay dividends in terms of cargo capacity with the roof folded since it will take up less space in the boot.

Our spies have caught the new 4 Series Convertible in traffic by immortalising a fully camouflaged prototype on a sunny day. Since spring is finally here, the test driver lowered the roof and raised the wind deflector for the most enjoyable experience behind the wheel. The car appears to have the full production body and the final lights, but the thick disguise gets in the way.

Despite the camo, we can notice the sporty bootlid spoiler with the built-in third brake light. Also at the back, the dual trapezoidal exhaust tips are similar to those of the new 3 Series, specifically the hotter M340i. That’s not a coincidence since the new convertible from BMW will be largely based on the sports saloon by inheriting the same CLAR platform.

We can’t quite see what’s going on inside the cabin, but that’s not an issue since the dashboard design will also be basically taken from the 3 Series Saloon. We actually have an older spy shot (attached below) from a previous batch showing the interior of the new 4 Series Convertible, which confirms the similarities between the two models.

Underneath the bonnet, the UK-spec model in its base form will likely carry over and have a turbocharged 2.0-litre petrol engine developing 184 bhp in the 420i. Step up to what will probably be an M440i version and you’ll be rewarded with a larger 3.0-litre inline-six rated at 326 bhp.

Arm yourself with patience as it will be a while before BMW is going to remove that annoying camouflage taking into account the 4 Series Coupe will be the first to come out. The droptop could follow within a year, and eventually a new 4 Series Gran Coupe.