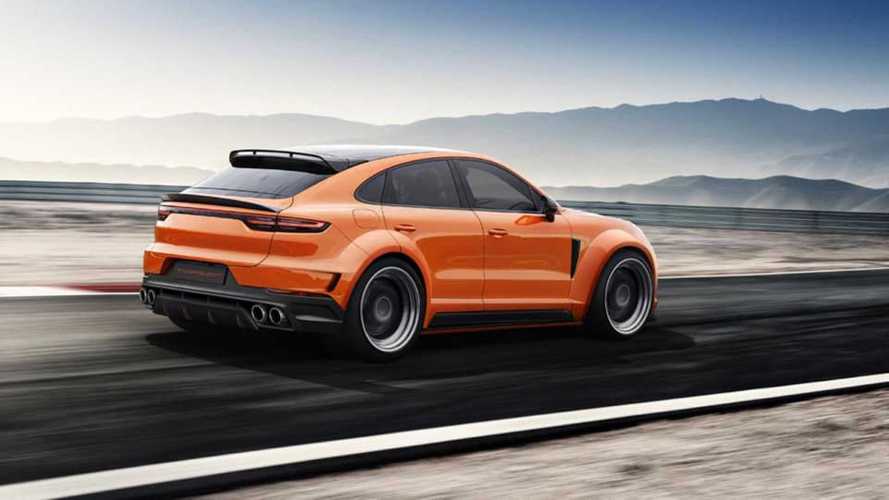 In our eyes, the recently launched Porsche Cayenne Coupe is one of the prettiest coupe-SUV offerings on the market today. The mix of a dramatically sloped roofline and 541 bhp under the bonnet makes for a proper performance vehicle with an appealing design. However, we know many of the model’s buyers will go for additional visual and aerodynamic tweaks, either from Porsche itself or from an aftermarket tuning company, and Russia’s TopCar has just teased something those buyers might be interested in.

The Moscow-based tuning studio is well-known for its aggressive but refined appearance packages for high-end SUVs, sports cars, and supercars. Judging by the first available image of its Cayenne Coupe project, the specialists will stay true to their traditions with a full wide bodykit, a massive diffuser integrated into the rear bumper, and a fixed wing at the back. We are only able to see the rear quarter of the sporty SUV which leaves us wondering what the front looks like.

In the past, TopCar has also offered power upgrades for some of its projects and it will be interesting to see whether Porsche’s new coupe-SUV will also get a boost. A new exhaust system, a remapped ECU, and an improved intake system could easily push the output closer to the 600 bhp mark.

All you need to know about the Cayenne Coupe:

Some of TopCar’s most recent packages include a carbon fibre makeover for the Mercedes-AMG G63, as well as a super aggressive bodykit for the Lamborghini Urus. One of the studio’s most epic creations is the all-carbon Porsche 911 Turbo which rides on ADV.1 21 inch-wheels and has 650 bhp under the bonnet.

More details on the Cayenne Coupe tuning project should be released in the coming weeks, so stay tuned.