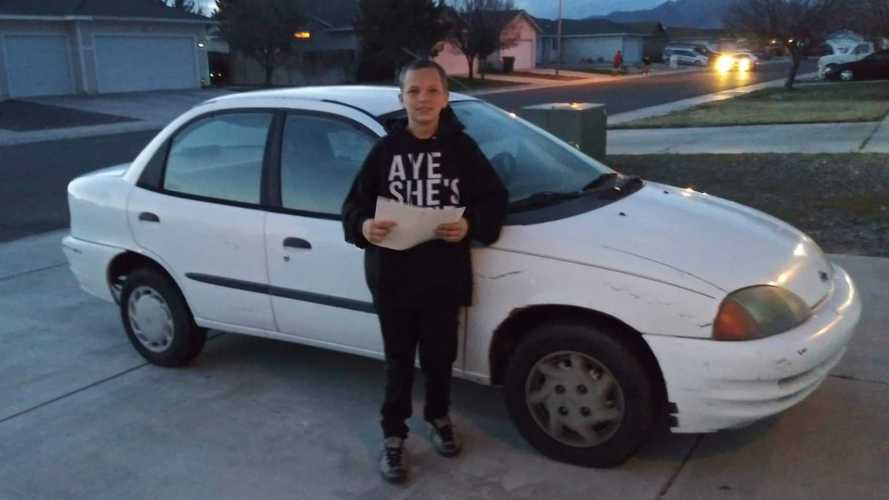 This little guy deserves your attention.

The story you are about to read here is further proof you don’t have to drive an expensive or powerful car to be happy in life. Meet Krystal Preston, a single mother of three kids and three dogs from Fernley, Nevada USA who recently got the present of her life from one of the three most important people in her life – her 13-year-old son.

As unfair as it sounds, William Preston is currently the oldest man in the house – and he knows this is a heavy burden. He does yard and housework for people in the neighbourhood to make a little extra money to help the family budget. Inspired by videos on YouTube where children surprise their moms with cars, William recently decided he will make her mom happy and proud, too.

He saw a woman on Facebook selling an old 1999 Chevrolet Metro and contacted her offering a trade for his Xbox or some yard work. Initially, she said no but after further negotiations, she agreed. “It was really cheap so I asked her if I could trade it or earn it, and at first she said no, and after she thought about it, then she said yes," William details the negotiation with the owner of the Chevy Metro.

Once the two agreed on the details, William went home to share the good news with his mom. “Mom, I got you a car!” William and Krystal then met the woman selling the car who drove them to her house to finalise the deal. Krystal admits the Metro needs some work done but is “perfect.”

“I was handed the keys and paperwork to the car and I'm freaking out but so in shock. So we got into the car it started right up and off we went. I am so proud of my son. He is such a good kid. William, I love you son and thank you. You have such a big heart and I love you...,” Krystal posted on Facebook. Nearly 2,000 people have shared the story on social media ever since it happened with more than 8,000 hitting the like button.

Source: Krystal Preston on Facebook via FoxNews and KSLA