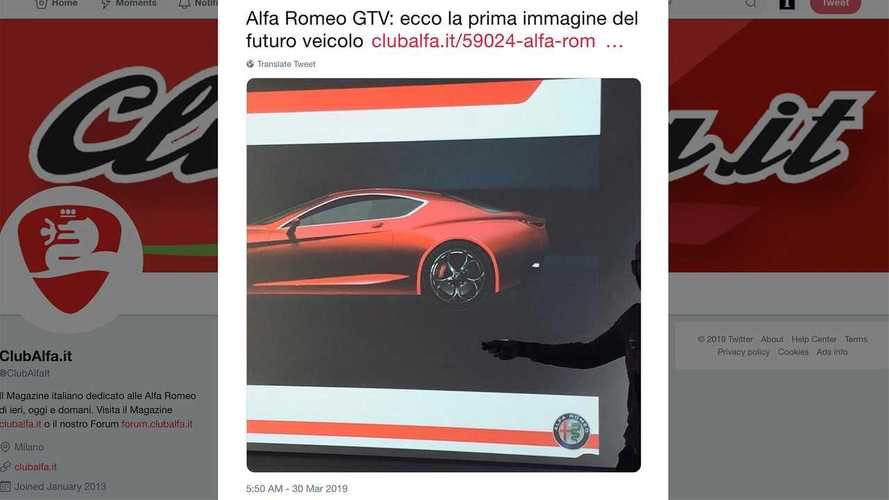 If this is the new GTV, then Alfa Romeo has a beauty on the way.

A tweet from Alfa Romeo enthusiast site Club Alfa has leaked a photo purportedly revealing the rear of the revived Alfa Romeo GTV. Earlier reports claimed the model was simply a two-door Guilia – not the sexy coupe in this image.

Alfa Romeo announced the revived GTV as part of its five-year product plan in 2018. At the time, the company confirmed the coupe used its hybrid new E-Boost engine with over 600 bhp. The mill is allegedly a version of the existing 2.9-litre twin-turbo V6 that makes 505 bhp. Torque-vectoring all-wheel drive and a 50-50 weight distribution should give the model capable handling. In addition, there's room for four people, but the folks in the back might be rather cramped, based on this new image. The GTV reportedly arrives in 2021, and a convertible version could debut in late 2022.

The GTV is a historic nameplate in the Alfa Romeo lineup. Introduced in the 1960s, the coupes were sportier takes on the Guilia. Power came from various displacements of the brand's famous twin-cam four-cylinder engine. A later generation used the Alfetta hatchback as the starting point, including the GTV-6 with a bulging bonnet and six-cylinder power. The model name returned from 1995 to 2005 for a front-wheel-drive sports coupe.

If the new GTV doesn't do it for you, Alfa Romeo also has a new 8C on the way. It packs a twin-turbo mid-mounted engine and electrified front axle offering a combined output in excess of 700 bhp. This grunt is enough for the coupe to reach 62 miles per hour in less than 3 seconds. A carbon fibre monocoque would wrap around this potent powertrain.