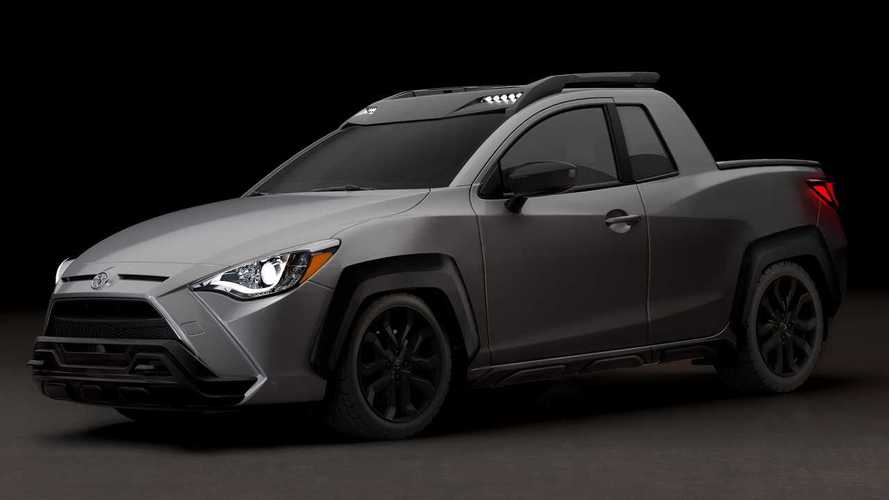 With 103 bhp, it's the most powerful subcompact truck ever built.

On the first day of April, Toyota is introducing another special vehicle. After revealing an open-top HiAce bus for the Australian market earlier today, the Japanese company is also previewing the Yaris Adventure which will make its public debut at the upcoming 2019 New York International Auto Show later this month.

Said to be answering the “question that nobody asked,” the rugged small vehicle takes the shape of a tiny two-door pickup which should capitalise on the booming small crossover class. Toyota believes it is creating a new segment, something it calls the supermini pickup segment, that has never really existed because ”no one realised they needed it until now.”

As you can see from the image at the top of this page, the cabin offers room for just two with storage space just behind the seats. One of the reasons the marque decided to ditch the rear seats was because “it was determined that no one really wants to sit back there anyway.”

Our take on the Yaris:

“Toyota is very excited to debut this product that nobody saw coming,” a senior executive at Toyota who preferred to remain anonymous commented. “We’re constantly listening to our customers and reacting to the market. We have to blame the market on this one, as we haven’t had one customer ask for a truck like this.”

Being the only truck in the subcompact truck segment, the new Yaris Adventure leads the segment in basically everything, which means it’s also the most powerful supermini truck ever created with 103 bhp and 112 pound-feet of torque from a 1.5-litre four-cylinder engine. It is mated to a newly developed AWD system.

PLANO, Texas (April 1, 2019) – Adventure-seeking Americans have looked to Toyota for more than 60 years to provide trucks that can take them on and off-road. Now comes a truck that is perfect for those who want to tell their friends they own a truck but never veer off pavement. The Yaris Adventure will make its debut in its native environment of the 2019 New York International Auto Show.

Capitalizing on consumers flocking to the small crossover segment, Yaris Adventure answers the question that nobody asked. It’s part truck, part sedan, but 100 percent awesome. Toyota sells every mid- and full-size truck that hits the lot, but Yaris Adventure will fill the void of a subcompact pickup segment that has never truly existed because … well, no one realized they needed it until now. The Yaris Adventure comes complete with a two-seat cabin with storage space behind the seats. The extra cab with rear seating was ditched because it was determined that no one really wants to sit back there anyway. Meanwhile, in the back, a composite inner bed ensures cargo capacity for the most moderate jobs. The Yaris Adventure combines the comfort and fuel economy of a sedan with ideal cargo space, but not so much that friends will ask you to help them move.

“Toyota is very excited to debut this product that nobody saw coming,” said a senior executive at Toyota who preferred to remain anonymous. “We’re constantly listening to our customers and reacting to the market. We have to blame the market on this one, as we haven’t had one customer ask for a truck like this.”

The Yaris Adventure leads its segment in everything.* It comes standard with a 1.5-liter inline four-cylinder engine that delivers 103 horsepower and 112 lb-ft of torque, both top of its class.* Its 7.6-inch ground clearance and 42.5-inch legroom are also class-leading. There isn’t a spec on the Yaris Adventure that doesn’t come out on top.*

Fun fact: The Yaris Adventure is the only vehicle with a bed that doesn’t come with a full-size spare tire.

*Yaris Adventure is the only truck in the subcompact truck segment.

A bold, passenger-first design gives the 2020 Yaris Adventure a distinct look. The front end projects a gutsy attitude with a hexagon lower front grille and sharp-eyed headlamps. The automatic LED headlamps incorporate daytime running lights, which pair perfectly with the aggressive front bumper complete with tow hooks, perfect for getting pulled out of a situation the vehicle shouldn’t have been in to begin with.

At 167.2 inches long, the Yaris Adventure Grade can fit into parking spaces that most other truck owners have to pass up. That’s a real bonus for urban dwellers, even though Yaris Adventure was made to leave the city (via highway).

Straying from the Pavement

Yaris Adventure off-roading excursions will begin and end with dirt roads. All Yaris Adventures are equipped with coil-spring double wishbone front suspension and leaf spring rear suspensions. This suspension, paired with a 7.6-inch ground clearance, is perfect for taking a curb in a mall parking lot or clearing the shrubs when parking in a friend’s front yard.

The Dynamic Torque Vectoring AWD that was recently introduced on the 2019 RAV4 will not come standard on Yaris Adventure. It will, however, offer a newly developed AWD system capable of allowing Yaris owners to carefully bring their vehicles out of their underground garage when it snows in the city.

The standard 7-inch Display Audio system delivers clear, powerful sound played through two speakers, one in each door. Maximizing connectivity and control, the system is equipped with one USB media port and Bluetooth wireless technology for hands-free phone operation and music streaming.

Here’s another surprise from the 2020 Yaris Adventure: no navigation (because anyone smart enough to drive the Yaris Adventure knows exactly where they’re going).

Due to the extensive testing done on Yaris Adventure, a warranty won’t be offered for this truck because it would be unthinkable that something goes wrong. However, roadside assistance will be offered, as it’s likely the truck will get stuck if it veers too far off road.