Why is Ford driving a camouflaged Mustang Bullitt test vehicle? 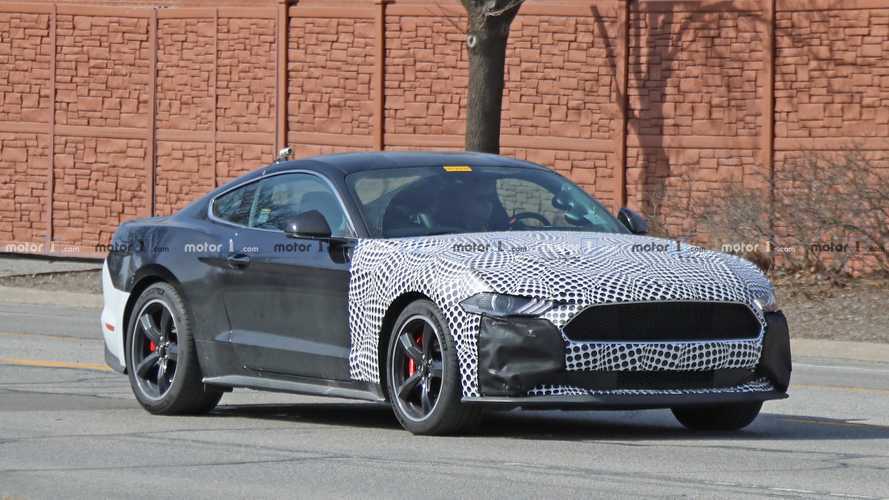 A Mustang facelift seems certain, but is something else happening here?

Here’s something rather strange. Obviously, it’s a Ford Mustang, and obviously, it’s a special-edition Bullitt model. If the wheels and brakes don’t give it away, the Bullitt-branded faux gas cap at the rear surely does. But Ford just unveiled the Bullitt last year, and it’s only slated for a two-year production run in 2019 and 2020. So what the heck is going on here?

Get to know the Bullit:

Ford Mustang Bullitt is coming to the UK
⠀

Let’s analyze this mystery by simply looking at the photos face value. Unless there’s something behind the black tarp on the corners up front, it looks like this car could have a different fascia with changes to the vertically oriented driving lamps. A quick glance at the rear suggests something different is happening there as well, but in reality, that’s just a normal unpainted rear fascia with modifications down low for testing gear on the exhaust.

We also saw a very similar Mustang test car earlier in the month with identical coverings up front. That machine was believed to be a hybrid, and with the testing gear visible on the exhaust of this Bullitt, it’s possible this car could actually be a hybrid mule in Bullitt clothing. Spy photographers noted this car definitely had a V8 exhaust note, but we have heard rumours that Ford could build a V8 hybrid Mustang. We highly doubt, however, that such an offering would be part of a Bullitt package.

There’s one other curious observation about this Bullitt test car. The turn signals in front and taillights out back are of the clear, Euro-spec variety. Could Ford have something different in mind with the Mustang for Euro markets? Or, could the Bullitt branding and Euro lights simply be there to throw us off the true nature of this car – a V8 hybrid test mule?

From our vantage point, the likely scenario is that Ford has a very minor facelift coming for 2020 model-year Mustangs, including the final year for the Bullitt. The current triangular-shaped vent design for the driving lamps was part of the Mustang’s mid-cycle refresh for the 2018 model year, and to be honest, we’ve heard no small amount of criticism from the Mustang enthusiast community over the changes. Sales data suggests the facelift wasn’t well received either – 2018 Mustang sales fell to 75,842 units, which is the lowest figure since 2011.

The criticism for the current look and the drop in sales supports a change, not unlike what Chevrolet is doing with the heavily criticized Camaro facelift. As for the hybrid aspect, this could also be a V8 hybrid test mule, or Ford might simply be working on some engine tweaks that call for additional emissions testing.