We’ve been patiently waiting to see the new A45 ever since Mercedes-AMG dropped that exciting “Merry Driftmas” video during the last festive season. The latest teaser is quite similar, but the location has been changed from Germany to Sweden while the tarmac has been replaced by an icy surface. Both videos are sending out the same message – even though it’s a hot hatch based on a front-wheel-drive platform, the new Mercedes hatch will shake its tail much like a RWD car.

How is that even possible? Simple (well, not really) – thanks to a drift mode that makes the A45 slide without the driver putting too much effort into it. It’s unclear whether it will be the same with the production car, but in the prototype, the driver has to put the car in Race mode, deactivate ESP, pull both paddles located behind the wheel forward, and then pull the right-side shift paddle.

Equipped with a tail-happy 4Matic system, the new performance compact hatchback will utilise a dual-clutch eight-speed automatic in charge of channelling the immense power developed by the turbocharged 2.0-litre petrol engine. In the base version, the four-cylinder mill will push out 383 bhp whereas in the first-ever A45 S will churn an impressive 416 bhp.

With the Geneva Motor Show behind us, we’ll likely see the A45 / A45 S in Frankfurt this September. It certainly won’t be up on display next month in New York because the A-Class hatchback is not sold in the United States.

The Mercedes-AMG A45 is getting closer: 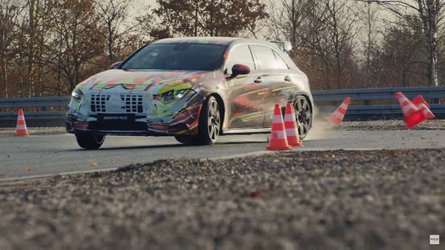 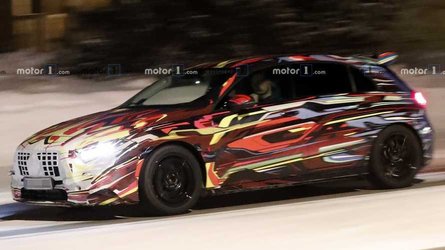 New Mercedes-AMG A45 spied with colourful disguise
By: Adrian Padeanu
++