Domino's developing in-car pizza ordering app because why not? 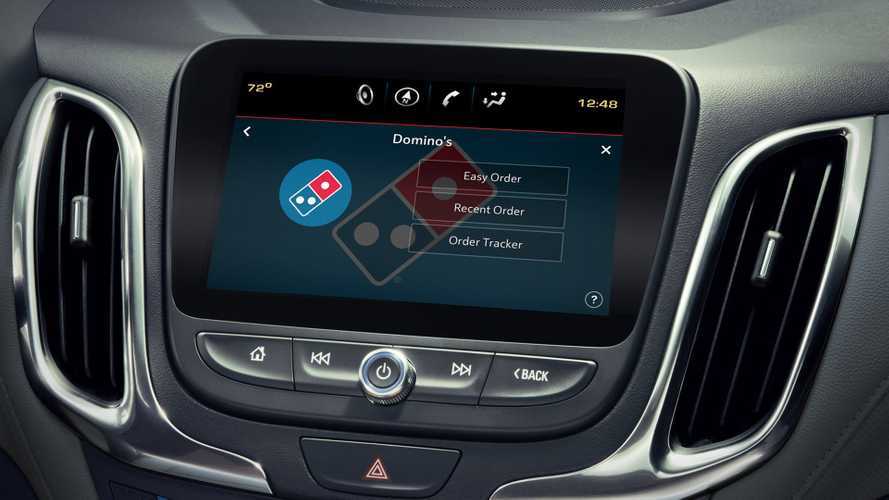 It's perfect for the person that doesn't have 60 seconds to phone in a pizza order.

There seems to be no stopping the progression of technology in automobiles. The latest feature that will soon grace your infotainment system is a spiffy app from Domino’s Pizza that lets you order up dinner from the comfort of the driver’s seat. As far as critical vehicle functions go, a Domino’s app isn’t exactly high on the list. Then again, any young family with hungry kids screaming in the back might appreciate a quicker solution to sourcing dinner.

Domino's Pizza is on the move:

1984 Tritan A2 Domino's Pizza Delivery Car Is Up For Sale

The global pizza chain is working with Xevo Inc. to bring the app to vehicle systems. Xevo is a major player when it comes to in-car commerce systems, and like it or not, shopping for a variety of goods and services while jaunting across town is quickly becoming a fact-of-life in our connected world. Domino’s hopes to have its new AnyWare pizza ordering app pre-loaded in new vehicles starting late this year.

"At Domino's, we want pizza ordering to be simple and always within reach, no matter where a customer happens to be," said Chris Roeser, director of digital experience at Domino's. "This new AnyWare platform will make ordering pizza easy, whether you're in the car waiting for the kids to finish football practice or you're on your way home from work."

The process allows users to order up a pizza through the app, or it can find the nearest store for an in-car phone call to place the order instead. Frequent diners can save preferences in the app so a fresh pizza can be ordered in just a couple taps. For obsessive-compulsive types, the app will also track the progress of the pizza as it’s being made, so you’ll know the exact moment it comes out of the oven.

Are apps in cars too distracting?

Are Apps Changing The Way We Buy Cars?

Presumably, the app would only be used by passengers while the car is in motion, or drivers when the car is parked. Distracted driving is a growing concern among many individuals and entities as vehicle infotainment systems become increasingly complex. Back in December 2017, General Motors came under fire from safety groups for its Marketplace app which, among other things, would allow driver and passengers to order food, make hotel reservations, and even prepay for petrol.

Customers can order their favorite Domino's items through their vehicle's touchscreen

ANN ARBOR, Mich., March 25, 2019 /PRNewswire/ -- Domino's Pizza (NYSE: DPZ), the largest pizza company in the world based on global retail sales, knows that some people practically live in their car, so why not make the car a great place to order pizza too? Domino's is working with Xevo Inc., the global leader of in-vehicle commerce and services for automakers, to launch the latest AnyWare pizza ordering platform pre-loaded in cars starting in 2019. The new in-vehicle Domino's app is powered by Xevo Market, an automotive commerce platform for connected cars.

"At Domino's, we want pizza ordering to be simple and always within reach, no matter where a customer happens to be," said Chris Roeser, director of digital experience at Domino's. "This new AnyWare platform will make ordering pizza easy, whether you're in the car waiting for the kids to finish soccer practice or you're on your way home from work."

Customers will be able order their Domino's favorites with just a few taps on their vehicle's touchscreen. Once the customer is logged in, they can save time by ordering their Easy Order or most recent order, and then track it with Domino's Tracker®, so they know when it's out of the oven. Customers can locate their local store and call in an order from the in-car interface as well. The Domino's ordering feature will be automatically loaded on millions of cars with the Xevo platform starting in late 2019.

"We're excited to work with Domino's, and to have them join the Xevo Market platform, which is already live in millions of vehicles on the road today. Domino's is the world's largest pizza company, and they've always been technological innovators," said Brian Woods, chief marketing officer at Xevo. "Xevo Market makes it possible for Domino's to reach people directly in their cars, streamlining mobile ordering to help busy consumers save time."