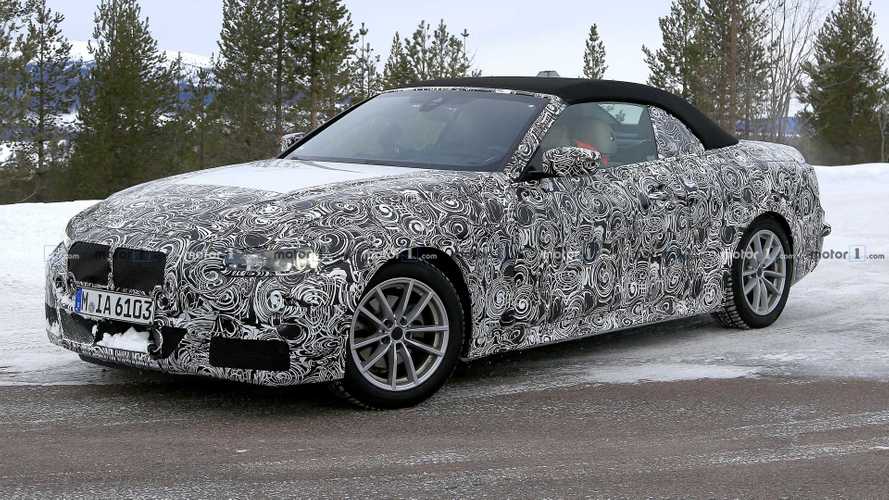 Winter is almost over, but cold-weather testing continues.

Our spy crew in Sweden caught a glimpse of the forthcoming BMW 4 Series Convertible still wearing plenty of camouflage. Actually, the photographer caught two different 4 Series prototypes out and about, each sporting a slightly different rear fascia. One car has simple round exhaust tips out the back, while the other adopts a trapezoid exit not unlike what you’d find on the 6 Series and 8 Series. We don’t believe there’s an M variant in the mix here, and actually, if you look close at the prototype with the standard tips, the rear fascia seems to have trapezoid-shaped openings cut into it. That could simply be an earlier prototype, or it could be testing upgraded exhaust components.

BMW 4 Series Convertible spied showing off its body and cabin

In any case, we expect the new 4 Series to not simply be a 3 Series copy with a folding roof and two fewer doors. To help separate the sedan from the coupe, looks for BMW to incorporate design cues borrowed from the larger coupes (such as the trapezoid exhaust outlets) and the new Z4. Specifically, there’s likely a Z4-based grille installed behind the camouflage, one that’s a bit thinner and wider compared to the 3 Series. Similarly, we think the front fascia will also incorporate the wider look from the Z4 with shorter side vents. The notched headlights from the 3 Series don’t appear to be in the cards, either.

Of course, the bigger news is that the next 4 Series convertible will return to a fabric roof as opposed to the folding hardtop on the current model. This will help the new droptop shed a fair amount of weight, something that will also happen courtesy of its CLAR underpinnings. The new 3 Series lost upwards of 45 kilograms, so a similar weight loss could befall the ragtop as well. With the range-topping engine likely being the same 3.0-litre, 382-bhp I6 from the 3 Series and Z4, it should be a thrilling drive.

The new 3 Series debuted last year at the Paris Motor Show, and we expect to see the 4 Series arrive later this year as a 2020 model. We think the convertible will also land for the 2020 model year, but it could ultimately arrive later as a 2021 machine.