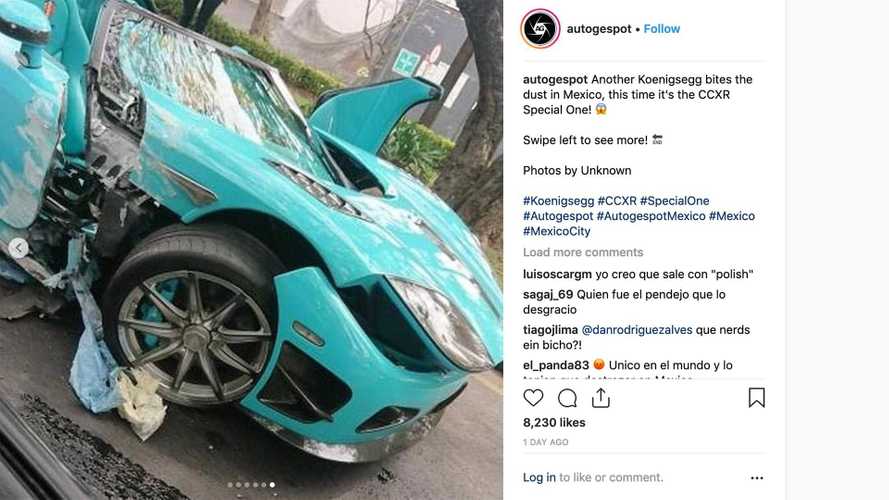 The owner intends to rebuild the car.

Wrecking any car is a tough experience but severely damaging a Koenigsegg CCXR Special One worth an estimated $1.5 million (approx £1.1) must really hurt an owner's heart. Unfortunately, an owner in Mexico City is feeling this terrible pain, and there are photos that capture the considerable damage for the whole world to see.

Judging by the photos, the damage is largely on the passenger side, but looking closely indicates there's some damage to the driver side of the rear bumper, too. The front end incurs most of the harm, especially the wing area directly below the A-pillar where the body panel is gone. The suspension is also damaged, as evident by the way the wheel is oriented.

The owner intends to rebuild the car, according to Infobae, but the process reportedly could take quite a bit of time. Koenigsegg reportedly doesn't have the spare parts on hand to immediately repair this car, so the owner has to wait for the automaker to remake them.

The owner maintained an Instagram account under the name don_koenigsegg that mostly focused on this CCXR. The first post from August 7, 2018, showed the vehicle's emblem with the message "coming home soon." A later image caught the machine's arrival in Mexico in October 2018. Koenigsegg originally built the car for Ana Al-Thani, a member of Qatar's royal family, who ordered it in the vibrant shade of blue with a matching interior.

The CCXR was Koenigsegg's revised take on the CCX that modified the 4.7-litre twin-supercharged V8 to run on E85 and E100 ethanol. The powerplant produced a lofty 1,004 bhp.