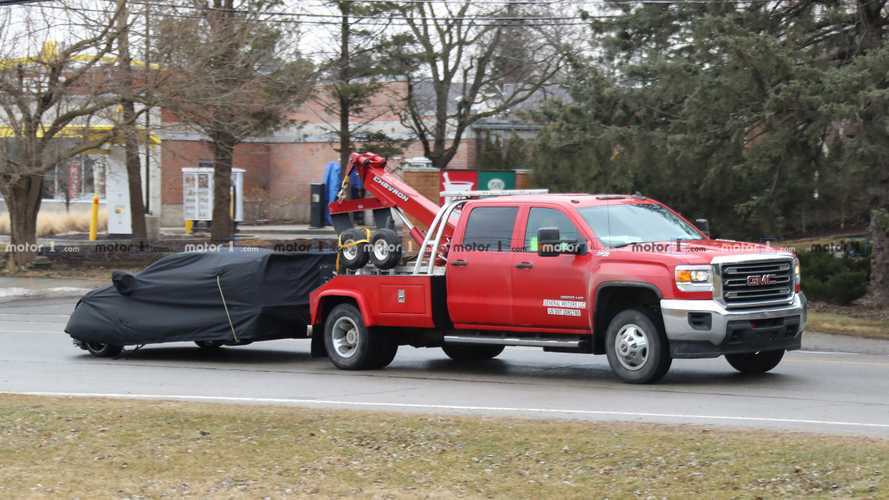 A GM breakdown lorry had to carry the hotly anticipated supercar home.

The rumour mill tells us alleged issues with the forthcoming mid-engined Corvette are in the past, but apparently this particular prototype didn’t get the memo. Our spy team happened to be in the right place at the right time, catching this C8 test vehicle pulling into a petrol station near GM’s Milford Proving Grounds in southeast Michigan without trouble. An unknown issue then rendered the car completely unresponsive, and after roughly a half-hour of fiddling, the pseudo-secret supercar was placed under cover until a GM-sourced breakdown lorry arrived to take it away.

The batch of photos don’t really show us anything we haven’t already seen, save for the slightest of peeks beneath the C8’s frunk. We can see what looks like a coolant reservoir mounted on the forward firewall, but that’s about it. The front fascia does look a bit different behind the mesh screen, notably at the corner where we’ve seen slanted side vents previously. We suspect that could be the result of some additional camo cladding behind the cover.

As for the exact nature of the problem, that’s a mystery. It’s certainly not uncommon for pre-production vehicles to have issues – that’s all part of the development process. Obviously, the high-profile nature of this car makes this sighting a bit more significant, especially with previous reports about significant electrical issues and the recent story about high-powered C8 test cars twisting frames. The rumour mill is rampant with talk that such problems were large enough to delay the new Corvette’s launch, and more than a few reliable Motor1.com sources feel this assessment is accurate.

Provided this unfortunate incident isn’t indicative of deeper issues, we’re expecting to see the highly anticipated C8 Corvette revealed in the next few months. There’s still a remote possibility it could appear at the New York Auto Show, but everything seems to point towards a stand-alone event in the summer, possibly at the Corvette Museum in Kentucky. Inside reports further say that production should begin in December, and the most recent report strongly suggests the first C8 Corvette will be called the Stingray.